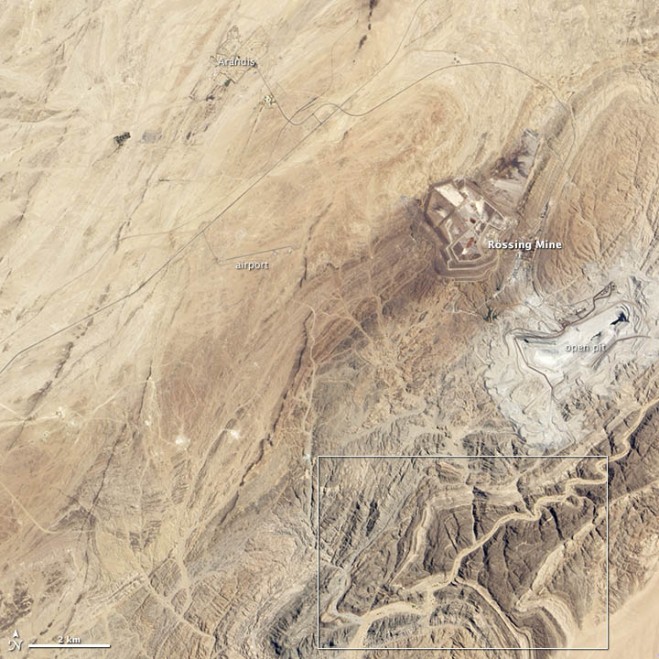 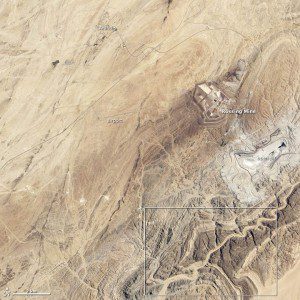 Rössing’s 400-meter (1,300-foot) deep pit and a large processing facility north of it are the dominant features in this NASA EO-1 satellite image. Click on image to enlarge.

The Namib Desert in southwestern Africa is one of the most inhospitable places on the planet. It rarely rains, and Namibia has the second lowest population density in the world, trailing only Mongolia. Yet something draws people deep into the desert, despite the harsh environment. 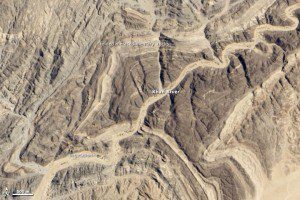 While the surrounding landscape is largely devoid of vegetation, groundwater beneath the channel sustains some shrubs, trees and grasses. Zooming in on a portion of the EO-1 image, small patches of green within and around the river channel are barely visible.

Namibia is among the top five uranium-exporting countries in the world. The Erongo region is home to Rössing mine, the oldest and third-largest producer of uranium in the world. Situated about 70 kilometers (40 miles) northeast of the coastal city of Swakopmund, the mine is located near the ephemeral Khan River.

The Advanced Land Imager (ALI) on NASA’s Earth Observing-1 (EO-1) satellite acquired this image of the mine and surrounding landscape on March 8, 2013.