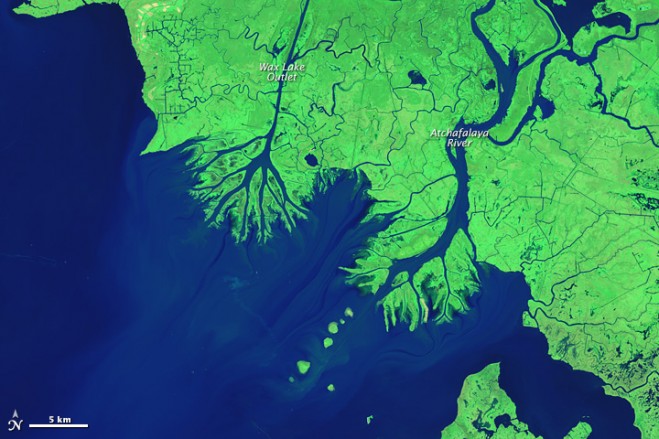 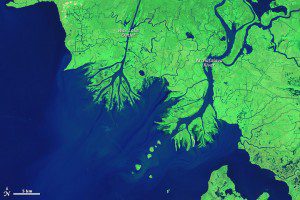 New land is forming in Atchafalaya Bay at the mouths of the Wax Lake Outlet and the Atchafalaya River as seen in these Landsat false-color satellite images from 1984 (right) and 2014 (left). 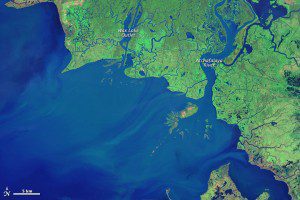 A pair of false-color Landsat satellite images of the Wax Lake Outlet in Louisiana shows the spread of mud deposits and land rising out of the water between 1984 and 2014. Geologists first noticed mud deposits in this area of the Atchafalaya Bay in the 1950s, and the growth of land in this delta has continued, adding 1 square mile per year.

Most of the delta plain of the of the Mississippi River Delta is losing ground, as admirably covered on the ProPublica website, which documents the extent and effects on people and wildlife. The delta has a history of flooding and severe storms as well as channels and dredging that all contribute to a dynamic and ever-changing land form.

“We are looking carefully at the Wax Lake and Atchafalaya deltas as models for building new land and preserving some of our coastal marshlands,” said Harry Roberts, director of the Coastal Studies Institute at Louisiana State University. “If we start diverting significant portions of the water and sediment from the main channel of the Mississippi River into adjacent wetlands, lakes and bays—as happens now in Atchafalaya Bay—we’ll be taking an important first step toward saving a significant part of Louisiana’s coastal plain.”