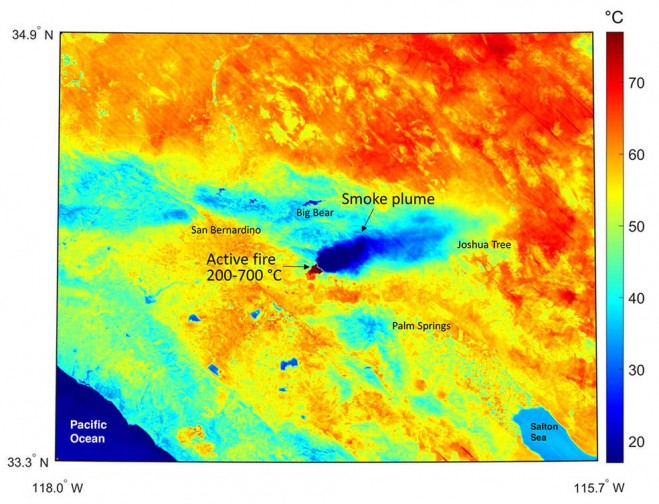 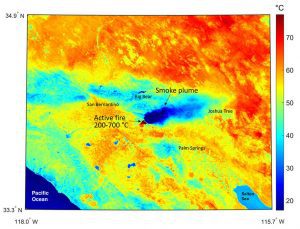 The wildfire began on the evening of July 31, 2020, after two smaller fires merged and rapidly grew in the hot conditions in Riverside County, east of Los Angeles, prompting the evacuation of thousands of residents. Air temperatures have soared past 100 degrees Fahrenheit (38 degrees Celsius), stressing the vegetation and turning the area into a tinderbox. By Aug. 3, the wildfire had exploded to more than 26,000 acres.

ECOSTRESS recorded this image on Aug. 1, when the burn area was approximately 4,000 acres in size. In the image, the black smoke plume can be seen drifting east and over Joshua Tree National Park in the Mojave Desert. With a spatial resolution of about 77 by 77 yards (70 by 70 meters), the image enables researchers to study surface-temperature conditions down to the size of a football field. In the active burn area, temperatures between 390 and 1,290 degrees Fahrenheit (200 and 700 degrees Celsius) were recorded, and in one pixel in the ECOSTRESS image of the burn zone, a peak temperature of 1,387 degrees Fahrenheit (753 degrees Celsius) was detected.