Mosaicking One of China's Megacities 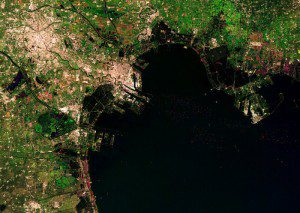 The port city of Tianjin, China, was imaged from multiple Sentinel-1A radar images, showing the extent as well as the environmental pressures in this city of more than 14 million people.

This image of Tianjin, China, was captured from multiple radar images from the European Space Agency's Sentinel-1A satellite. The city has a population of more than 14 million people, making it one of the world's largest and among China's five largest cities.

The large water body in the image is Bohai Bay, one of the country's richest fisheries. Overfishing and pollution are impacting this economic engine, with mounting pressure from the very active port of Tianjin, which is the largest port in northern China.