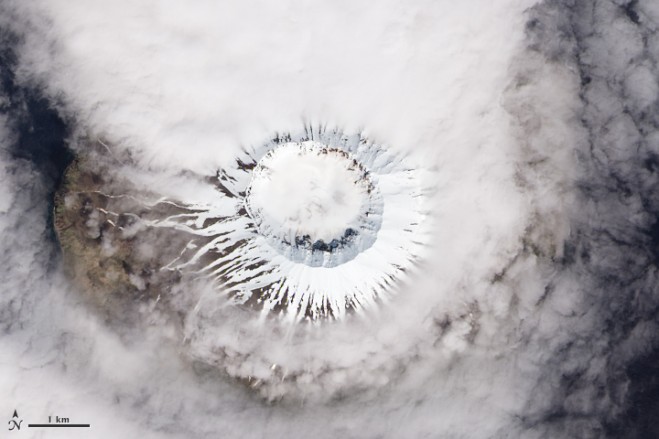 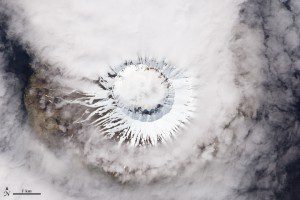 This June 8, 2013, Landsat 8 image of Herbert Island shows that the summit and the caldera are coated in snow and ice. Subsequent images in 2014 show the volcano ice free because of Alaska’s unseasonably warm summer in 2014.

This Landsat 8 image shows Herbert Island, one of several volcanic islands in the Aleutian chain off Alaska. The stratovolcano at the island’s center rises 4,200 feet (1,280 meters) above the ocean, and the entire island is just 6 miles (10 kilometers) across.

The summit and caldera are coated with snow and ice in this 2013 image. Subsequent images in 2014 show the volcano completely ice free, as Alaka had an unseasonably warm summer in 2014.

This remote volcanic island isn’t nearly as interesting to geologists as its neighbor, the Cleveland volcano. Cleveland is one of the most active volcanoes in the Aleutians, and it’s constantly monitored because any ash would impact air travel between North America, Asia and Europe.