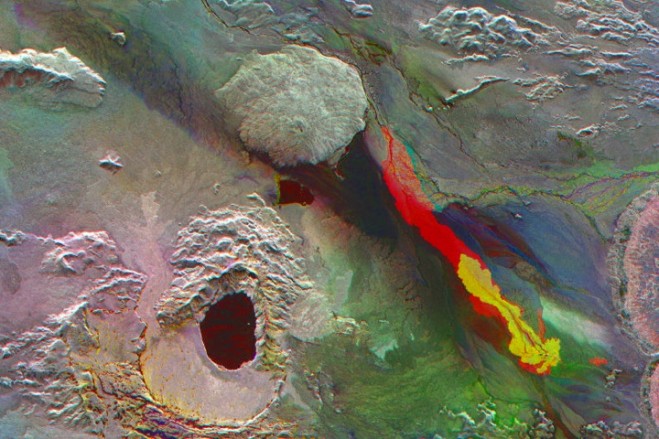 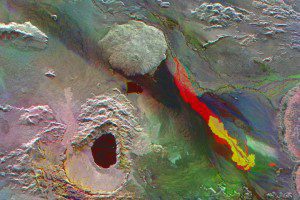 Three sets of data from the German radar satellite TerraSAR-X were acquired from Aug. 14-Sept. 4, 2014, and then superimposed to show lava growth.

The lava outflow on the Holuhraun field northeast of Iceland’s Bardarbunga volcano continues unabated. The lava field has grown to cover an area greater than 25 square kilometers.

The German TerraSAR-X radar satellite has been used to monitor the lava fields. As shown in the accompanying image, yellow shows the lava field’s growth from Aug. 13-Sept. 4, 2014; red shows the expansion from Sept. 4-15. A second eruption area also can be seen as a small red spot in the image’s lower right corner.

Radar interferometry, the process of detecting movements in Earth’s surface, has been especially optimized at the German Aerospace Center (DLR) for the TerraSAR-X satellite. The rough surface of freshly cooled lava reflects the radar signals back strongly; it appears bright and is easily visible on the lava flow at the lower right of the image or on the two arcs at the right edge of the image (the northern edge of Vatnajökull). Smooth surfaces, such as water, reflect the incoming radar signals away from the satellite, so they appear dark in the image.

The DLR Remote Sensing Technology Institute is investigating processes for early detection of volcanic eruptions as part of a joint project called IsViews (Iceland subglacial Volcanoes interdisciplinary early warning system). An early warning system can help limit the effects of volcanic activity on air traffic and the local population. In addition, the institute is working as part of the European FUTUREVOLC project, which is pursuing the development of a comprehensive volcano monitoring system. Both research teams use high-resolution remote sensing data from satellites, including TerraSAR-X and TanDEM-X.