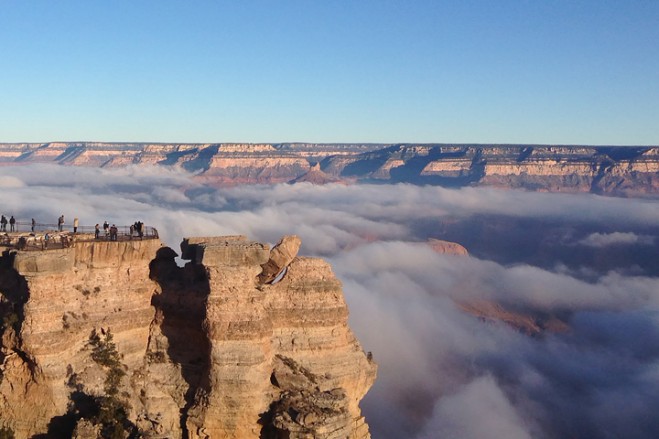 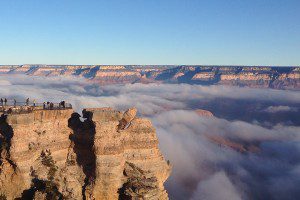 This photo of Mather Point shows fog filling the Grand Canyon on Nov. 29, 2013.

The Grand Canyon stuns visitors with breathtaking views every day. Between Nov. 29 and Dec. 2, 2013, it stunned visitors even more by not being visible. A rare meteorological event filled the canyon with an ocean of clouds. Such events are so rare that National Park Service rangers—who see the canyon every day—wait for years to see the ground-hugging fog. 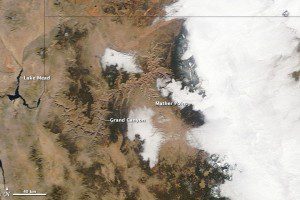 The 2013 Grand Canyon fog event was unusual because of its extent, as shown in this image captured by the Moderate Resolution Imaging Spectroradiometer instrument on NASA’s Terra satellite.

The fog was trapped in the canyon by a temperature inversion, which happens when the air near the ground is cooler than the air above it. A high-pressure system brought low temperatures, clear skies and calm winds to the Grand Canyon. During the long nights, the ground cooled quickly, chilling the air immediately above it. The air higher in the atmosphere didn’t cool as quickly, so an inversion developed. Without wind to stir it, cold dense air was trapped beneath a more buoyant layer of warm air.

The inversion was only half of the story. A few days earlier, a winter storm dumped heavy snow and rain on northern Arizona. The National Weather Service reported 11.5 inches (29.2 cm) of snow at the Grand Canyon Rim. The snow and rain left the ground and the air above it very moist. As the air near the ground cooled at night, the water condensed into fog, which was trapped in the canyon by the temperature inversion.