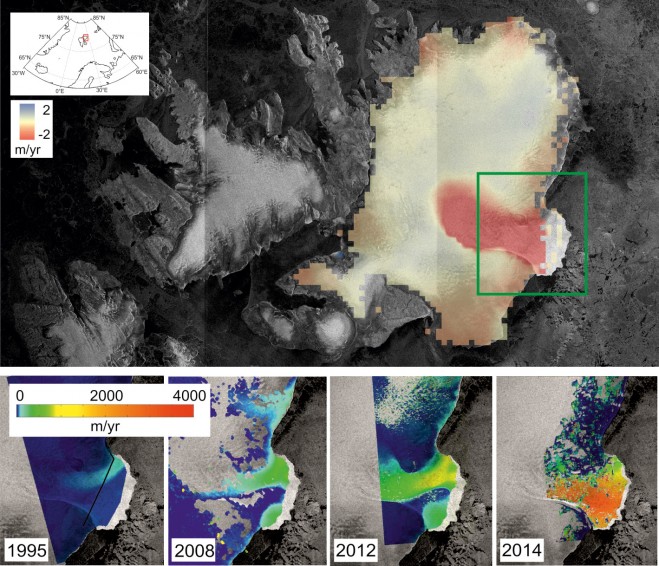 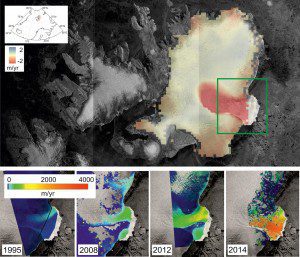 The top image shows the rate of elevation change between 2010 and 2014. The bottom images show how the speed of ice loss has increased through the years.

During the last two decades, the Austfonna ice cap on Norway’s Nordaustlandet island in the Svalbard archipelago has lost more than 50 meters of ice and stretched 50 kilometers inland. The outlet glacier from the ice cap is now flowing 25 times faster in that same time period.

Researchers from the Centre for Polar Observation and Modelling (CPOM) at the University of Leeds in the United Kingdom recently published their study of the region in Geophysical Research Letters. They based their study on combined Earth observations from eight satellite missions from both Sentinel-1A and CryoSat.

“Glacier surges, similar to what we have observed, are a well-known phenomenon,” said CPOM Director Andrew Shepherd. “However, what we see here is unusual because it has developed over such a long period of time, and appears to have started when ice began to thin and accelerate at the coast.”

The ice’s temperature has increased in recent years, and that may have been the original trigger for ice cap thinning. This and other melting glaciers have contributed to sea-level rise. This space and time analysis help these and other scientists understand the rate and extent of the melting as well predict the impact of future melting.