This can be done automatically with specific algorithms in TerraScan. The point clouds first must be calibrated and tied into measured reference points. This is often done with TerraMatch, which uses trajectory data to find the best solution for the match. Once the multiple flight passes have been calibrated with each other, the overlapping point clouds should be classified to their own class, often called overlap.

The next step is to classify the points into different classes, such as ground, vegetation, building roof, etc. It’s advisable to check the classification result with aerial photographs for any anomalies. It’s possible to run the building vectorization right after the automatic classifcation, but it’s advisable to manually verify classifications, as there may be some strange points left in the classfication resulting from errors or misclassified data, such as roof windows.

Once classification is complete and the automatic building vectorization has run, each building has a unique identifier. There’s a tool to review each building and see if it meets the conditions or if it needs to be edited. In addition, there’s a set of tools to adjust the roof edges or edit details. Aerial images with accurate camera x,y,z positions and orientations support this process. Because laser data provide known equations for roof planes, one can measure edge positions from a single image. This measurement method is often called monoscopic measurement.

TerraScan’s latest feature uses oblique images for wall texturing for more realistic city models. The images can be captured during LiDAR collection, ideally with five cameras—one looking down and the other four in oblique angles forward, left, right and backward to capture most of the facades. Alternatively, other available oblique images can be used, such as those from Pictometry. The only requirement for the oblique images is that the camera calibration parameters and exterior orientation are known. The software automatically textures the walls when the images are aligned and positioned. The building vector models don’t have to be produced from LiDAR data, as even manually vectorized building models can be texturized with this method. 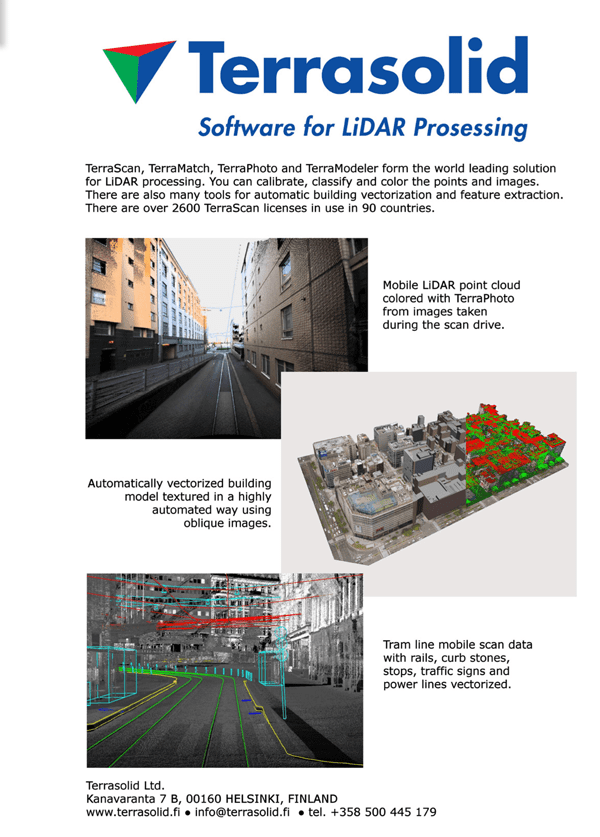