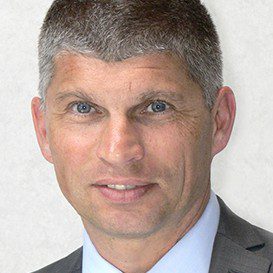 EIJ:Â You've gone through a few changes during the past year, including a name change fromÂ Astrium to Airbus Defence and Space as well as your own title from executive director of Astrium Services' GEO-Information Division to head of the Geo-Intelligence program line. Does Geo-Intelligence in the title signify a further rebranding?

Brenner: Â We did change the title to Geo-Intelligence, but it has been a much deeper process than a mere rebranding. We now have synergies among the three former EADS divisions”Airbus Military, Astrium and Cassidian. We're part of one of the four business lines of Airbus Defence and Space, named CIS (Communications, Intelligence and Security), which gives us even more opportunities in the group. As you might have heard in 2014, there was a portfolio review in Airbus Defence and Space, and we were reconfirmed as a core business.

EIJ:Â Are the four different business lines leveraging geointelligence in their own products and services?

Brenner:Â Our product portfolio, including WorldDEM, is of interest to other Airbus divisions. They can leverage our information for their missions, but we also have to be successful in the outside market. Our Geo-Intelligence program line had a good year in 2014, and it gives us credibility. You know our product portfolio, so you can imagine what can be done with products such as digital elevation models and mapping in this group.

EIJ:Â I imagine you've always had a large presence in the military sector, but now you're further aligned with the defense activity within your group. How has the realignment affected that sector of your market?

EIJ:Â The Earth imaging community has been intrigued by the recent sale of the newly commissioned SPOT 7 satellite to the Azerbaijan-based company Azercosmos. Can you shed some light on how that decision came about?

Brenner:Â This is a great example of our realignment, because we feel it's a win-win partnership. We transferred SPOT 7's ownership, but we're entitled to commercialize the satellite's data. We'll continue to provide full access to the satellite's capacities and deliver an unchanged commercial service to our worldwide customers.

It's also a winning scenario for Azercosmos, which has designed an ambitious space program. Although the company is interested in its own very-high-resolution (VHR) satellite, SPOT 7's transfer immediately made the company an Earth observation satellite operator.

Azercosmos is interested in the hardware as well as the soft skills required to operate the satellite and use the data. As an established satellite manufacturing and service provider, Airbus Defence and Space is pleased to support Azercosmos during its capacity-building phase. This is a good example of the synergies in
our group.

Another good example is our 2014 sale of an Earth observation satellite to Peru. We could immediately start working with the customer on capacity building, training staff on satellite operation and data use, and providing telemetry.

EIJ:Â In today's competitive marketplace, your company's ability to build and operate Earth observation satellites is unique, although some of the smallsat companies are trying to take that approach. Are other differentiators key to your success?

Brenner:Â In the VHR market, we have taken some market share in the past year, as the market doesn't want a monopoly. We also have high-resolution (HR) and synthetic aperture radar (SAR) satellites to differentiate us. We have a comprehensive constellation, complete since 2014, with two VHR satellites (PlÃ©iades 1A and 1B), two HR satellites (SPOT 6 and 7) and two SAR satellites (TerraSAR-X and TanDEM-X). We'll also be able to distribute imagery from the Spanish PAZ SAR satellite coming up in 2015. In 2014, we also strengthened our portfolio by adding the DMC satellites, which expanded our capabilities significantly, making ours the largest fleet of Earth observation satellites commercially available today.

I think we're in a fantastic position, because in addition to the internal market that will help us grow our solutions business, we have the satellite constellation. We did well in 2014, but I think our biggest showing will happen in 2015 in terms of external growth.

EIJ:Â You made an interesting announcement at last year's Esri User Conference about the availability of your company's satellite imagery for Esri's ArcGIS Marketplace, including the ability to task the satellites. That's anÂ interesting advancement for moreÂ real-time data delivery.

Brenner:Â Our competitors talk about resolution, but the freshness of the data is often more important for customers. We've been proactive in providing them with the latest imagery.

The deal with Esri is part of the online and software partnerships we set up to facilitate customers' access to the freshest data. Operating first-class satellites is important, but being able to rapidly deliver the images they acquire is key.

Another main differentiator is our network of direct receiving stations. It’s the largest in the world, with almost 40 stations around the globe, equipping more than 25 organizations. This number is continuing to grow.

EIJ:Â QuickBird-2's recent re-entry reminded Earth imagery users that there's a limited timeline on Earth observation satellites. Are you constantly looking at the health of your satellites and planning for your next-generation capabilities?

Brenner:Â SPOT 6 andÂ SPOT 7 are very young, and SPOT 5 will retire at theÂ end of March 2015. PlÃ©iades 1A and 1B are fairly young and providing an incredible amount of data. TerraSAR-X and TanDEM-X are in their mid-life, and they're still doing well.

But indeed we do work on future scenarios. For example, we're looking at the next-generation PlÃ©iades satellite or a different scenario. I can't provide too much information, but it's one of our next major initiatives.

EIJ:Â Is the alignment of a sister company that makes satellites an advantage that might help you become the leading commercial satellite imagery company?

Brenner:Â Yes, but we won't build satellites just because we have a sister company that manufactures satellites. It must be a win-win situation, and it has to answer a need from the market.

Last year was the second for our Geo-Intelligence program line and the rebirth of Airbus Defence and Space. We did a good job with SPOT 7 and the Azercosmos partnership. We also did a lot of business in many countries, including Japan, where we enhanced our partnership with PASCO and sold Tokyo Spot Image. It's not that we abandoned the Japanese market”just the opposite, as we want to enhance our cooperation with PASCO.

Brenner:Â This year we're focusing onÂ WorldDEM, which we launched at theÂ GEOINT event in Tampa in 2014. We'll also continue to expand our network of direct receiving stations and our reseller network to take full advantage of ourÂ satellite constellation, which is the world's largest.