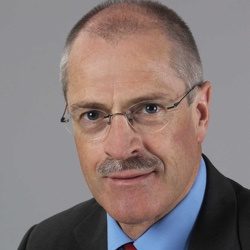 Herrmann: I helped start Infoterra, bringing commercial radar as well as the WorldDEM data product to the market. I moved over to the telecommunications side, because I feel an enhanced communications capability for Earth observation is important.

Herrmann: The EDRS technology is unique and will become operational soon. This summer we'll launch the first geostationary node, EDRS-A, which will contain a laser communications capability that has gone through decades of persistent development work to give us a quantum leap in bandwidth.

As you may know, the microwave spectrum is pretty congested. It's a struggle to get bandwidth for downlink or even communications. By using lasers, we overcome that congestion.

The EDRS program is a public-private partnership with the European Space Agency. In the first deployment scheme, we'll install two geostationary satellites. The first I've mentioned will be launched this summer, and the second, called EDRS-C, is planned for launch in 2017. The two nodes are complementary in the sense that we double capacity. We also create redundancy over the coverage area, reaching from Greenland in the west to Singapore in the east. The north-south extension ranges from pole to pole.

We can service many platforms”imaging satellites or airborne systems that carry reconnaissance payloads or any kind of imaging payloads that require high bandwidth. We're flexible, so we can point to any platform and service it for a period of time. Such capability complements what's available in the market today.Â  Sometimes you have a lot of congestion in certain areas where a large number of systems are operating, or you don't have enough ground stations to dump your data.

Sentinel-1 is the first platform that's going to use EDRS SpaceDataHighway. The satellite is part of the Copernicus program for the European Commission, formerly called the Global Monitoring for Environment and Security program. Copernicus comprises a fleet of Sentinel missions that will monitor environmental security and climatology.

Two types of these satellites are EDRS-enabled. Sentinel-1 was launched last year and has a laser communication terminal that has been checked out. We also have a geostationary test satellite, Alphasat, which has proven the concept of the laser data relay approach we will operationalize soon.

Sentinel-1 is a synthetic aperture radar (SAR) satellite, primarily for maritime domain awareness. The satellite is dumping its data to European ground stations. As soon as it flies over these ground stations, it switches over to this data relay system. It can double the capacity of possible data collects, so it's complementary and efficient in a way that ensures the Sentinel satellite can function at a global scale despite the bottlenecks that occur with ground stations because of bandwidth limitations and short overflight times.

EDRS will be used to communicate with the International Space Station in two years, providing astronaut video links and the ability to transmit real-time science data.

Herrmann: It's actually the result of improved sensor capability and performance. Better resolution and wider swaths have resulted in a data explosion. Previously, operators would just store a satellite's data on board and wait until it could contact a ground station. Now, with improved sensor performance, you can't dump all the data without many ground stations, and that's expensive. A data relay can act like a virtual ground station in a position best aligned for the current orbit. That way we ensure stored and newly collected data make it home.

EIJ: It's significant that the Sentinel satellites will double their capacity. Is that kind of improvement possible with other satellites that might add to your communications capability?

Herrmann: Increasing the connection capacity is one aspect”another is to enable near real-time transmission, specifically in cases of ad-hoc services to monitor an event somewhere on the globe. You want minimum latency with a disaster or event. The trend with latency goes in the direction of less than 30 minutes. We have cases where customers require 10 minutes of information latency, and that's only possible with a data relay beyond the site of ground stations. That's not capacity-driven, but rather time-driven.

EIJ: Near real-time data is a fascinating development. What applications do you have in mind?

Herrmann: We'll start demonstrating benefits for specific applications once the Sentinel-1 platform becomes operational. Such capability will be particularly valuable when a piracy situation or some illicit trafficking operation is occurring and there isn't a line-of-site opportunity to downlink the data.

A typical case is the Horn of Africa. Most sea traffic has to pass by that region between Asia and Europe and the United States. There's a strong interest to closely monitor that area, and this is where we can prove the capability.

We can also enable new applications with airborne platforms”UASs or even manned patrol aircraft”particularly those that use advanced radio systems, some of which require high data rates to return the data. Today, commercially available bandwidths are limited to 50 megabits per second up to maybe 200 megabits per second to retransmit the data. If you want a live video stream, we can support 1.8 gigabits per second, which enables high-definition video streaming from multiple video packages. That's an area that will boost the application of these systems even in areas where it's difficult to get contact to a ground station or any other commercially available satellite-communication service.

Herrmann: We address a niche market today”the Earth imaging market for monitoring and reconnaissance. The technology itself could be used for other purposes, and we've been looking for alternative applications, such as a backbone in space. That's a field that some Silicon Valley players are exploring, but it isn't the primary target of the SpaceDataHighway service.

EIJ: It seems to speak to the increasing relevance of Earth observation that this technological leap forward is aimed at this market. How long has the technology been in development?

Herrmann: It has been in development in our labs since the 1980s. I still remember the green laser lights shining in our labs. In 2007, we did the first in-space flight tests by putting laser communication terminals on TerraSAR-X, and the counterpart was put on the U.S. Air Force ENFIRE technology platform. They've been speaking to each other at 5.6GB per second for test purposes since 2008. That's a long time of demonstrating that the technology is viable in space.

Last year we performed tests that are essential for using geostationary relay satellites, overcoming a lot more distance”up to 40,000 kilometers, which is a challenging distance to accuratelyÂ  point a laser beam. Now we're getting ready to go, with all the major hurdles overcome at the technology level.

Herrmann: I think the awards are looming on the horizon. Of course, there are international groups discussing standards in this context, and the science community discusses different uses. The technology has reached maturity, and no other approach is at the same level of maturity. This gives us a leading position in the market, and it's well respected in the space community as well as the user community, particularly for those who want to bring precious high-resolution data back home.

Another thing worth noting that will positively impact imaging vendors and the remote sensing community is the way EDRS will optimize the data-collect sequence. Those operating electro-optical systems don't like clouds. When they fill a global archive, for instance for use in Google Earth, they're capitalizing on weather forecasts. We can help them optimize imagery collection so they can avoid clouds and collect in holes in the clouds to deliver useful imagery. Again, such capability capitalizes on the relay, acting as a virtual ground station to put wherever it's needed.

Today, with existing ground stations, satellite operators sometimes have to wait until they can retask their system. Often, by the time they retask, the cloud situation has changed. If you have the capability to retask within 20 or 30 minutes, you have a chance to optimize your system for cloud avoidance. It's actually a retasking service for imaging satellites. Tasking is simply a matter of optimizing workflows. An image system operator can press a button to collect imagery of areas of interest, and we'll provide the service to enable the collection.

EIJ: Are there other applications for this technology we haven't covered?

Herrmann: One thing worth mentioning is that EDRS will be used to communicate with the International Space Station in two years, providing astronaut video links and the ability to transmit real-time science data. This will significantly improve astronauts' interaction with their science colleagues on the ground. This application isn't related to Earth imaging necessarily, but it's another capability we've set up.

Another thing I should mention is that we aren't reaching global coverage in the first-generation EDRS deployment. However, we're preparing the next-generation data relay, which will fill the gap over the Pacific by 2020.