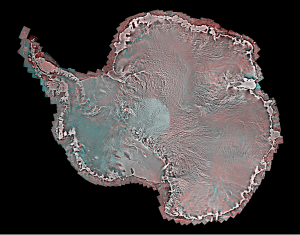 The RADARSAT-2 pole-to-coast Antarctic mosaic was created by MDA in cooperation with the Canadian Space Agency as part of the International Polar Year.

MDA’s Information Systems Group released a detailed new image of Antarctica for use in applications such as global climate change, shipping and transportation, exploration and environmental science. The image, developed in coordination with the Canadian Space Agency for the International Polar Year (2007-08), is a unique compilation of more than 3,150 RADARSAT-2 images that comprise a single pole-to-coast map covering all of Antarctica.

Operational users, scientists and researchers in climate change will derive significant value from the unique information presented in the image, which provides insight into the current condition of the Antarctic ice sheets, as well as the nature and rate of change in the Antarctic environment. In addition, the image provides a useful map to support operations needing detailed information to understand the surface and sub-surface features of the Antarctic ice. The knowledge gained from this important scientific mission will feed into the collective information being compiled worldwide on the Antarctic, providing a deeper understanding of the relationship between ice and climate change.

RapidEye Canada Ltd., an affiliate of Iunctus Geomatics Corp., a supplier of optical satellite imagery in Canada, acquired the assets of RapidEye AG of Brandenburg and Havel, Germany, a global provider of high-resolution imagery and geospatial solutions.  The purchase was finalized on Aug. 29, 2011.

“RapidEye will continue to operate as an independent company, leveraging a new strong German management team to maintain its successful brand and relationships,” commented Ryan Johnson, president and CEO of Iunctus Geomatics. “Iunctus will continue to invest in RapidEye as we focus on creating a more customer-focused approach and additional value for our customers through our reorganization activities.” 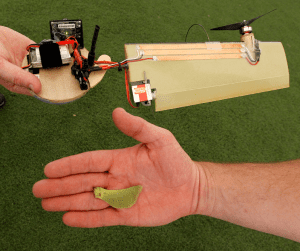 Lockheed Martin’s Intelligent Robotics Laboratories in Cherry Hill, N.J., has spent the last five years developing an unmanned aerial vehicle (UAV), dubbed the Samarai, to replicate the motion of maple tree seeds softly whirring through the air like one-winged helicopters. Its engineers gave The Associated Press a preview in early August at an indoor soccer field in Southampton, N.J.

The Samarai is about a foot long and has just two moving parts plus a camera. It can be controlled by a remote control or by an app on a tablet computer.

Bill Borgia, director of the Lockheed Martin lab, said troops could carry the devices in their backpacks, launch them by throwing them like boomerangs and use real-time images from cameras to find out what might be around the next corner. Unlike most drones used by the military, these can hover in place like a helicopter and take off vertically in tight spaces.

NASA’s Upper Atmosphere Research Satellite (UARS) is expected to re-enter Earth’s atmosphere in late September or early October 2011, almost six years after the end of a productive scientific life. Although the spacecraft will break into pieces during re-entry, not all of it will burn up in the atmosphere.

The risk to public safety or property is extremely small, and safety is NASA’s top priority. Since the beginning of the Space Age in the late-1950s, there have been no confirmed reports of an injury resulting from
re-entering space objects—nor is there a record of significant property damage resulting from a satellite re-entry.
It’s too early to say exactly when UARS will re-enter and what geographic area may be affected, but NASA is watching the satellite closely and will keep the public informed. Visit the following Web page for updates on the satellite’s orbital track and predicted re-entry date: www.nasa.gov/mission_pages/uars/index.html.

Paris-based EuroConsult estimates 1,145 satellites, with a value of nearly $200 billion, will be built for launch during the next 10 years, representing a 51 percent increase from the previous decade. The information is revealed in the 14th edition of EuroConsult’s Satellites to be Built & Launched.

Approximately 50 companies that operate communications and broadcast satellites in geostationary orbit, as well as an additional 10 companies operating satellites in lower-altitude orbits for communications and Earth-observation services, serve the commercial space business. The market is driven primarily by established operators’ investment cycles for replacing in-orbit capacity (representing 70 percent of orders in the past), and to a lesser degree by new systems for newer commercial companies and governments. 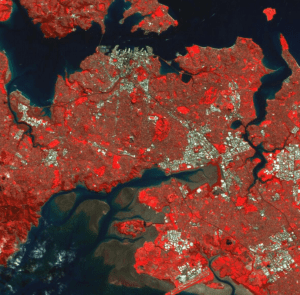 NigeriaSat-X was built by engineers from Nigeria’s National Space Research and Development Agency (NASRDA) under the supervision of Surrey Satellite Technology Ltd (SSTL). The new generation of Nigerian scientists and engineers trained under the NigeriaSat-X project will continue to support Nigeria’s space program. In total, 26 Nigerian engineers were located at SSTL’s facilities in Guildford, United Kingdom, for 18 months throughout the design and test phases.

Currently two joint NASRDA-SSTL teams are working in parallel in Guildford and Abuja, Nigeria, to commission NigeriaSat-X and NigeriaSat-2, which was launched at the same time. After the initial commissioning phase is complete, the NASRDA team in Guildford will return to Nigeria to continue NigeriaSat-X operations from the Abuja ground station. 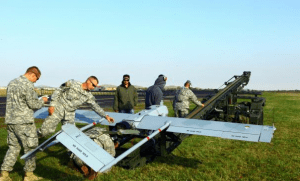 The Oklahoma Army National Guard flew an RQ-7B Shadow UAV as part of its training for deployment.

Oklahoma state officials are currently pushing for an unmanned aerial drones corridor, which would stretch for approximately 80 miles between Fort Sill and the town of Clinton, to be approved by the Federal Aviation Administration (FAA). If approved, the air corridor would be the first civil airspace in the country where unmanned aircraft could be flown without prior FAA permission.

Oklahoma is already one of the nation’s primary centers for drone development. The proposed air corridor is expected to spur business development and encourage relocation of existing projects.

Oklahoma State University’s Mulitspectral Laboratory, which develops unmanned aerial vehicle (UAV) technologies and maintains close ties to defense contractors, already has an agreement with the military to fly drone aircraft over portions of Fort Sill’s airspace at a height of up 40,000 feet. An airport serving only unmanned vehicles opened at Fort Sill in 2006; no manned civilian or military flights use the airspace allotted for the proposed corridor.

By 2018, aerospace analyst The Teal Group expects that 15,000 UAVs will be in use inside the United States, which is nearly half of the total worldwide. Aviation observers expect the drones to be deployed under a variety of circumstances—some are being tested for deployments in U.S. arenas of war abroad, others are used by federal and state law enforcement agencies as surveillance aircraft. 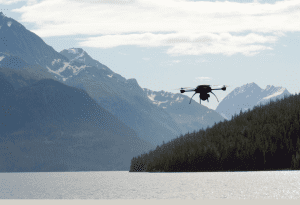 The University of Alaska Fairbanks Geophysical Institute and BP Exploration Alaska demonstrated the use of a three-pound unmanned aerial vehicle (UAV), called “Scout,” as a way of gathering 3-D aerial data to aid in oil spill clean-up efforts. Through the use of the technology, oil spill responders can complete Shoreline Clean-up and Assessment survey work with minimal impact on the shoreline or critical habitat.

The University of Alaska received approval from the Federal Aviation Administration to operate the UAV in Alaska for research purposes. The demonstration focused on improving oil spill response and clean-up capabilities in the difficult terrain and conditions seen in Prince William Sound. BP funded the demonstration that took place in mid-July 2011, and representatives from the U.S. Coast Guard and the Alaska Department of Environmental Conservation also participated.

Aeryon Labs of Waterloo, Ontario, designed the Scout as a multipurpose imaging and surveillance platform. The Scout is battery powered and has a range of up to 1.8 miles. Its flight duration lasts up to 25 minutes with a payload and can reach a maximum speed of  30 miles per hour. The UAV can retrieve high-resolution georeferenced images of the coastline, stitched together to form a complete mosaic of the region of interest and used to generate a 3-D reconstruction of the area.