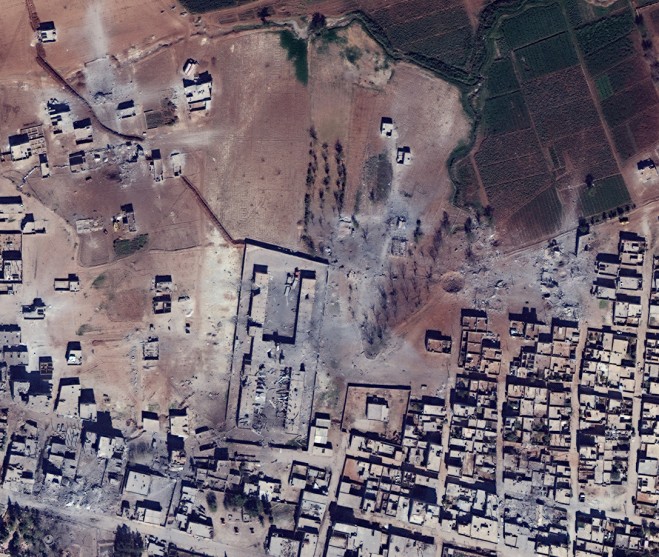 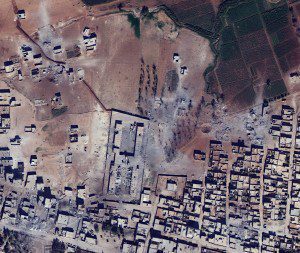 WorldView-2 satellite images collected on Oct. 22, 2014, reveal the true extent of Kobani’s devastation. The inset image shows Kobani buildings reduced to rubble and clouded by black smoke. The background image shows hundreds of cars abandoned on the Syrian side of the border around a crossing point into Turkey. Many were forced to leave without being able to take any belongings across the border. On the Turkish side of the border, a portion of the ground is used to store cars. 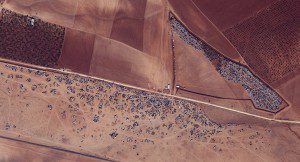 For more than a month, the northern Syrian city of Kobani has been at the heart of the struggle between Islamic State (ISIS) fighters and Kurdish defenders, who are battling to stop the region from falling into the hands of the militants. ISIS launched its first attack on the Syria-Turkey border town in September 2014 and has encircled it, leaving only a small corridor for residents to escape.

Kurdish fighters describe the battle against ISIS as a daily back and forth of urban street warfare, mortar and artillery duels with the militants, and snipers on both sides targeting anything they see moving among Kobani’s ruined buildings. U.S.-led coalition airstrikes have made it hard for ISIS to bring in fresh men and equipment, and that stopped the group’s initial advance. However, the militants still surround the town and hold parts of it despite Kurdish resistance on the ground and repeated coalition strikes from the air. The constant fighting has left many buildings and homes destroyed, displacing thousands of people.