April 5, 2015
UAS Innovations: Using Drones for Good—Humanitarians in the Sky

The view from the sky is hugely important for disaster response. Indeed, humanitarian organizations have been using satellite imagery for almost two decades. This bird’s eye view enables humanitarian relief efforts to assess disaster damage and resulting needs, which is key to saving lives and alleviating suffering.

Remote sensing satellites come with a host of challenges, however. For example, it took 64 hours to acquire and analyze satellite imagery following Typhoon Haiyan in the Philippines, one of the most powerful typhoons in recorded human history (64 hours!).

Can drones do better? Absolutely, which is why humanitarian organizations are increasingly exploring the use of drones, or unmanned aircraft systems (UASs), for disaster preparedness, risk reduction and rapid response. Some local communities also stand to become more empowered thanks to drones, which may ultimately have a more profound impact. 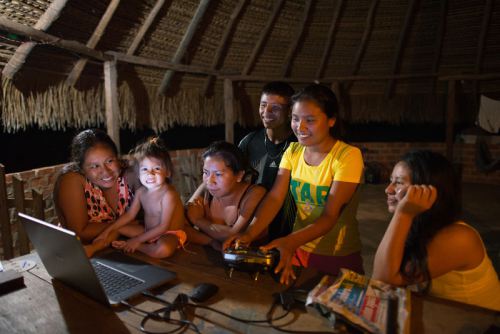 A local indigenous community in Guyana built and operated its own drones to monitor illegal logging and deforestation.

Although humanitarian organizations have used drones to search for survivors, assess infrastructure damage and support recovery efforts in the wake of Typhoon Haiyan and other disasters, they can’t be everywhere at the same time. The real first responders are by definition the local, disaster-affected communities themselves. To this end, local empowerment and community engagement are instrumental to ensure effective relief efforts.

This explains why a local team of Haitians in Port-au-Prince have been trained to deploy drones for disaster preparedness and response. When Hurricane Sandy tore through the country on its way to New York in 2012, this local team deployed its drones and provided much-needed imagery to the international community, thus speeding up relief efforts on the ground.

On the other side of the planet, in the forests of Guyana, a local indigenous community (pictured above) built and operated its own drones to monitor illegal logging and deforestation. When one of the pieces of the drone broke, the indigenous tribe scoured the village for different types of plastic and fashioned a new mount from an old beer crate. The drone was no longer a foreign, mysterious piece of technology, but something they owned, built and understood. Needless to say, members of the community will serve as first responders if floods or fires threaten their village.

Meanwhile, in East Africa, the Sentinel Project, a nonprofit organization trying to stop genocide worldwide, is using drones to prevent violence and counter rumors in Kenya’s Tana Delta. The drones directly support Una Hakika (“Are You Sure”), an information service that serves to counteract malicious misinformation (disinformation), which has been the trigger for recent outbreaks of violence in the region.

Una Hakika is powered by a dedicated toll-free Short Message Service (SMS) short code and an engaged, trusted network of volunteer ambassadors. When the team receives a rumor verification request via SMS, they proceed to verify the rumor and report the findings back (via SMS) to the community.

The Sentinel Project team recently introduced the use of drones to support Una Hakika’s verification efforts and will expand the program to include a small fleet of multirotor and fixed-wing platforms. Community engagement and ownership is central to the use of drones in the Tana Delta, an approach that has been well received and already has resulted in implementation improvements. The drones also could be locally deployed to support search and rescue efforts during droughts and floods.

Aerial imagery captured by international groups in the wake of Typhoon Haiyan could have been useful to local communities. Alas, there was no mechanism at the time to facilitate this exchange of information. This gap is one reason why the Humanitarian UAV Network (UAViators) was founded shortly after Haiyan. The purpose of UAViators, which is endorsed by the United Nations, is to promote the safe, responsible and effective use of UASs in a wide range of humanitarian settings. Thus, the UAV Network may increasingly serve as a useful interface between established humanitarian organizations and local disaster-affected communities that also use drones for good.

A first step in this direction may be UAViators’ crowdsourced crisis map of aerial pictures and videos of disaster zones. Time is a luxury that doesn’t exist in disaster response. Responders can’t afford to wait 64 hours to receive assistance while image analysts assess massive volumes of aerial and satellite imagery following a major earthquake or hurricane. So the Humanitarian UAV Network actively promotes the work of groups like Humanitarian OpenStreetMap and MicroMappers that use crowdsourcing to rapidly analyze aerial imagery.

In the wake of Typhoon Haiyan, for example, hundreds of digital volunteers rapidly analyzed high-resolution aerial imagery of downtown Tacloban—one of the hardest-hit areas—using OpenStreetMap’s crowdsourcing platform. Together, these “digital humanitarians” produced the most detailed and updated map of Tacloban available to the international humanitarian community. And many of the online volunteers who made this possible were Filipinos themselves.