IceBridge: Building a Record of¨ Earth's Changing Ice, One Flight at a Time

Because understanding of some important effects driving sea level rise is too limited, this report does not assess the likelihood, nor provide a best estimate or an upper bound for sea level rise. The projections do not include the full effects of changes in ice sheet flow. 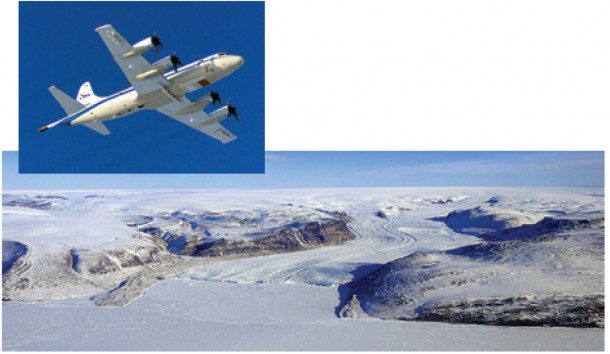 IceBridge will provide a yearly, multi-instrument look at the behavior of the rapidly changing features of the Greenland and Antarctic ice. Above: Greenland's Thule Glacier. Inset: NASA's P3 over the Beaufort Sea, north of Alaska.

ophie Nowicki bristles as she reads that statement to an auditorium full of scientists at NASA's Goddard Space Flight Center. As a scientist who builds computer models to study ice sheets and their impact on climate, Nowicki sees the statement as a challenge. It drives her to help lead an effort to build better models and provide better predictions.

What's at stake is far more than reputation or intellectual satisfaction. We want to know how sea level is going to change in our warming world, she explains. And she wants to know in time to improve the sea level forecast in the next report from the Intergovernmental Panel on Climate Change, which gives governments information to plan for climate change.

The problem is that the world's ice isn't behaving like anyone thought it would. Instead of a slow and steady melt as temperatures rise, glaciers are spitting out icebergs in many places, draining the Greenland and Antarctic ice sheets at an alarming pace. In other places, glaciers are barely moving or are growing thicker. On the whole, ice sheets are dwindling far faster than predicted, and this means sea level could rise more quickly than previously thought.

Trying to understand what is happening on the ice is like climbing Everest in tennis shoes, according to glaciologist”and sometimes mountain climber”Eric Rignot of the University of California-Irvine and NASA's Jet Propulsion Laboratory. Without a solid understanding of what's happening now, how could anyone guess what might happen in the future?

However, Rignot notes, scientists just got some better climbing shoes. The mission known as IceBridge carries an
array of instruments on airplanes to obtain the most complete picture of Earth's ice cover to date. Though it's not a satellite mission, IceBridge is more than a one-time field campaign.

Funded and structured like a satellite mission, IceBridge is a six-year campaign to continue measurements started by NASA's Ice, Cloud, and Land Elevation Satellite (ICESat). IceBridge also takes measurements no satellite could. These unique measurements are providing new insight into the processes that drive the melting of ice sheets and the condition of Arctic sea ice.

ICESat stopped collecting science data in 2009, making IceBridge critical for ensuring a continuous series of observations until an ICESat-2 mission is launched in late 2015. IceBridge will use airborne instruments to map Arctic and Antarctic areas once a year. The first IceBridge flights were conducted in March/May 2009 over Greenland and in October/November 2009 over Antarctica. Other smaller airborne surveys around the world are also part of the IceBridge campaign.

Editor's Note: Additional information on this project is available at NASA Earth Observatory's website at http://earthobservatory.nasa.gov.