In response to the needs of lead federal agencies and partners fighting the Ebola virus, the National Geospatial-Intelligence Agency (NGA) on Oct. 23, 2024, began providing unprecedented online access to its unclassified geospatial intelligence (GEOINT) products and services through a public-facing website dedicated to the crisis.

The site uses Esri’s ArcGIS platform and is hosted in the cloud by Amazon Web Services—both publicly available services—and features various base maps that provide foundational context for users who can visually overlay data from NGA and other sources, according to Steven Alness of NGA’s Xperience directorate.

In its role as geographer for the Department of Defense (DOD), NGA’s latest efforts are in step with other global events that have required the agency’s disaster support, including Hurricane Katrina in 2005, the Haiti earthquake in 2010, Hurricane Sandy in 2012 and Typhoon Haiyan in 2013.

“This has the potential of being a global incident,” says Tim Peplaw, GEOINT mission manager for NGA’s Integrated Working Group—Readiness, Response and Recovery (IWG-R3), which provides GEOINT support to humanitarian assistance and disaster relief activities. “We’re looking at multiple locations and trying to provide support. It’s not single threaded. It’s not just one event taking place. It’s happening on the entire western part of the [Africa] continent.”

The dynamic site allows NGA to update it as soon as new information is available.

“As we expose the data, we want it to be used, useful and usable,” explains Alness.

Maintaining the information at the unclassified level helps ensure it can serve a greater number of users, according to Martin Cox, national geospatial-intelligence officer for Africa and NGA issues manager for the Ebola crisis. Nongovernmental organizations using the information on the front lines of the Ebola fight have limited or no access to classified material.

“If we don’t keep it unclassified, the majority of the people who are working in the field will not be able to access the information they may need to help bring this epidemic to a close,” explains Cox.

Among the first data the agency released were geospatial layers relevant to the Ebola outbreak in Guinea, including cultural places and structures as well as communication, electric power and ground transportation infrastructure. The data will allow users to see Ebola cases by province and the locations of emergency treatment units. As a result, users can determine distances between transportation hubs, such as airports, and the closest emergency treatment unit.

In contrast to traditional static products NGA has provided relief workers during other events, the dynamic nature of the new website allows for continuous updates as new information comes in. The effort is in line with NGA’s focus on putting knowledge directly into the hands of users. Although the work is out of the norm for an intelligence agency, it’s the right thing to do, according to Cox.

“If [people using NGA products] are trying to do good, why would we not want to help?” he asks. 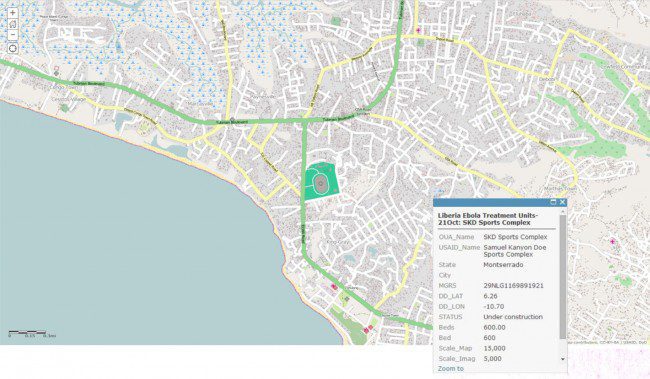 Although the affected area is already extremely large, infection rates in West Africa are predicted to grow exponentially larger, according to Cox. The combined size of Guinea, Liberia and Sierra Leone is 165,625 square miles, or roughly three times the size of Louisiana and 15 times the size of Haiti. Other neighboring countries, like Nigeria, which has been minimally affected, may be at risk in the future, adding to the scope of the problem.

The current outbreak is believed to have begun in late 2013, but it wasn’t until March 2014 that NGA analysts working with the National Center for Medical Intelligence at Fort Detrick, Md., began receiving questions from government customers related to Ebola’s spread.

“At that point, nobody really had the understanding that this was going to explode the way it has through the region,” relates Cox. “Everybody was surprised by just how quickly it got really bad.”

In July 2014, NGA established a working group to support the DOD, federal agencies and international organizations responding to the Ebola crisis. This includes providing situational awareness on how difficult terrain, socio-cultural issues and sparse infrastructure affect Ebola’s spread in the region.

Liberia, Guinea and Sierra Leone all rank near the bottom in measurements of life expectancy, education and standards of living across the globe, according to the United Nations Development Programme’s Human Development report. Liberia ranks 175th out of 187 countries on the report, Guinea is ranked 179th and Sierra Leone 183rd.

“These are three of the least-developed countries on the face of the Earth,” says Cox, adding that Sierra Leone and Liberia are still recovering from brutal civil wars.

The poor transportation infrastructure within these countries is especially apparent during the rainy season between late April and early October, when rivers swell, dense vegetation blocks access and dirt roads turn to mud.

So, in early October 2014, when a U.S. Army master sergeant stationed in the Liberian capital of Monrovia needed to reach a remote village by helicopter, he called NGA to help. The Army was supporting a flight of U.N. personnel trying to assess Ebola’s effects on a village in an extremely rural part of the country, quite a distance from Monrovia.

According to Cox, the Army had two coordinates and a general description of a village that might have a soccer field. In less than four hours—and a few hours before the helicopter was to take off—NGA provided graphics using commercial imagery that showed both locations and a soccer field large enough to land a helicopter. NGA received a call the next day from the master sergeant, saying the pilot never would have found the place if not for NGA’s graphics.

“We send people forward to be able to provide GEOINT support for our force in the field,” says Cox. “We are able to send these people with the proper equipment and the data sets and commercial imagery they need to be able to do their job.”

NGA’s direct support is vital to the relief efforts, especially the support to customers unfamiliar with GEOINT.

The current Ebola outbreak is unprecedented in its size and complexity. Unfortunately, the end is nowhere in sight.

Now NGA analysts are trying to determine why the virus hasn’t spread to neighboring countries. One theory is that the poor transportation infrastructure hampering relief efforts is also slowing the spread of the disease.

“What kind of constraints on movement might there be because of the impact of the rainy season upon roads and the dense vegetation among the borders?” asks Cox. “As the dry season hits, are we going to see the disease spread into neighboring Ivory Coast, Mali or Senegal?”

For now, Cox and his team are focused on one number: 42. That’s the number of days it takes for two incubation cycles to pass. If no new Ebola case occurs during that time, officials can declare an end to the outbreak.

“There are a lot of people working a lot of long hours to bring this to a successful conclusion,” says Cox. “We keep hoping we can start counting from 42, but unfortunately, we’re nowhere near that in this region.”