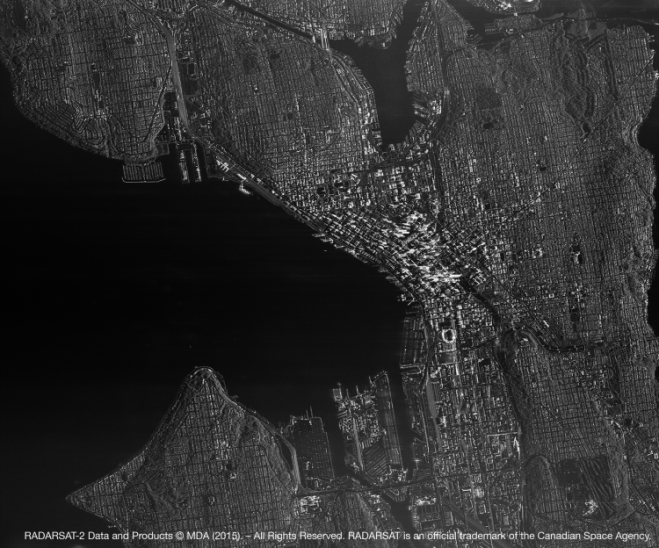 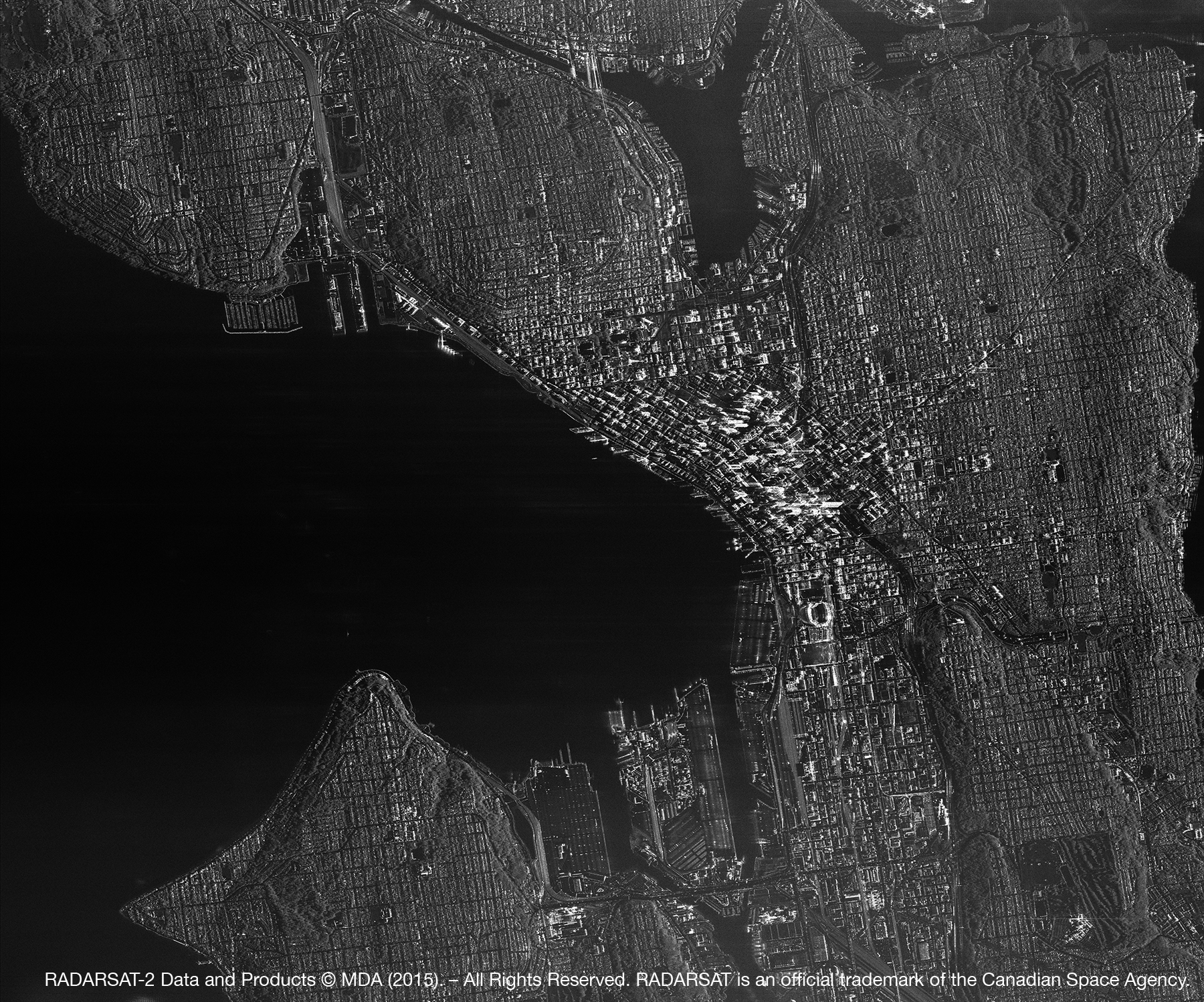 Multi-temporal Interferometric Synthetic Aperture Radar (InSAR) is a complementary technology that makes traditional monitoring more efficient. It can help monitor large areas and deliver the critical information that urban planners and engineers need to understand the state of urban infrastructure such as buildings, bridges, roads, airports and underground tunnels.

InSAR is a powerful radar technique that exploits the all-weather monitoring capabilities of SAR satellites such as RADARSAT-2. It uses multiple SAR images to generate maps of surface deformation based on minute differences in the phase of radar waves returning to the satellite. This enables the detection and measurement of millimeter-to-centimeter-scale changes in surface deformation. The routine nature of satellite monitoring is useful to detect, track and visualize growing surface-movement hotspots. The oil and gas industry has used this technique for decades as a cost-effective means to detect surface changes that can affect operations and assets.

MDA’s Geospatial Services is a leading InSAR provider and proponent of Homogenous Distributed Scatterer (HDS)-InSAR, which uses adaptive filtering to preserve boundaries among different types of scatterers. Adaptive filtering reduces the noise of distributed, low-backscatter areas such as asphalt and bare ground, while preserving the spatial resolution to increase the accuracy and geographic precision of the deformation result. HDS-InSAR provides high-fidelity monitoring across large areas, giving engineers a holistic view of entire cities while pinpointing specific areas and assets that warrant further inspection for damage due to subsidence.

The Impact of Groundwater Extraction and Rising Sea Levels Compounding the problem is the location of many of the world’s major urban centers within 50 kilometers of a coastline. The combination of groundwater extraction subsidence and rising sea levels presents significant challenges to protect infrastructure.

Medium- to high-resolution SAR imagery for use in the HDS-InSAR technique is desirable for urban infrastructure monitoring to better capture detailed infrastructure from point targets such as metal and building corners as well as coherent distributed targets such as asphalt and concrete surfaces. It combines the advantages of Differential InSAR (DInSAR) and Persistent Scatterer Interferometry (PSI) by suppressing noise across distributed targets, while preserving point targets. The HDS-InSAR method requires approximately 15 scenes or more for robust deformation results, while increasing point densities by an order of magnitude over PSI.

A street map of Seattle shows the construction route of the SR99 tunnel. (Credit: WSDOT)

The wide-area monitoring capability of InSAR is a vital component for monitoring urban areas to detect problems relating to sinking and rising water levels.

In Seattle, the Washington State Department of Transportation (WSDOT) is constructing a $3.1 billion, 3.2-kilometer bored road tunnel to replace an existing elevated surface viaduct that was damaged in a 2001 earthquake and has continued to pose a failure risk. Tunnel boring started in July 2013 and had progressed roughly 10 percent of the distance by December 2013, at which time the tunnel-boring machine Big Bertha encountered a mechanical failure that required the construction of a vertical rescue shaft to initiate repairs. Constructing the 37-meter-deep by 24-meter-wide shaft required significant dewatering through wells accessing three aquifer zones: a shallow zone, a mid-level zone and a deep zone (> 60 meters) extending down to glacial deposits. 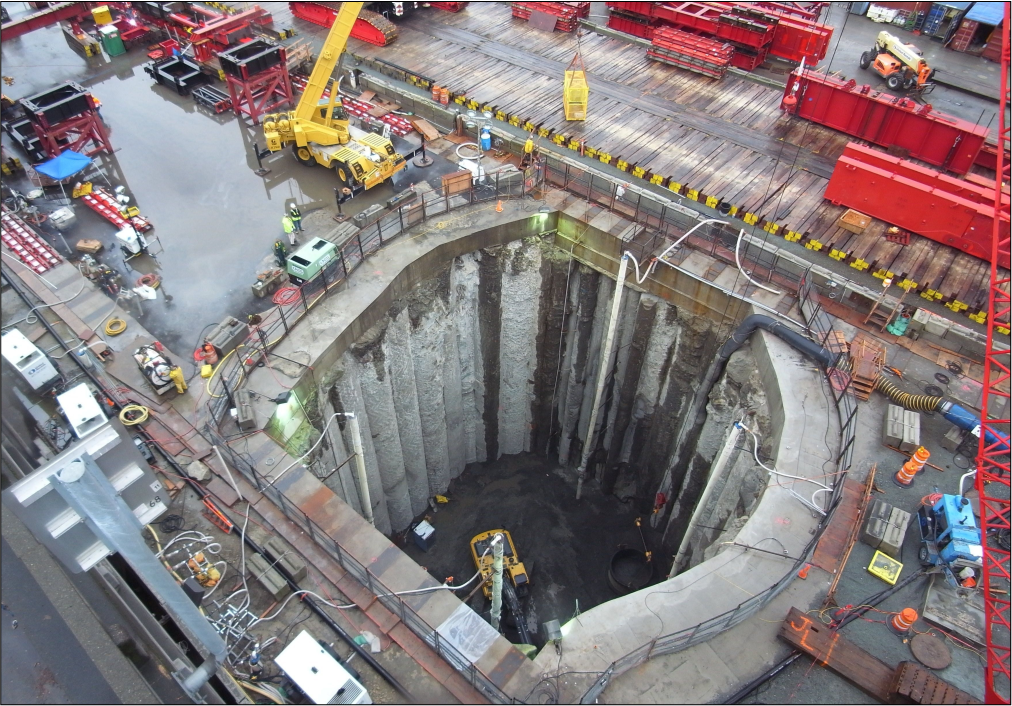 A large rescue shaft was excavated to make repairs on the failed tunnel-boring machine. (Credit: WSDOT)

The access shaft is in an area of the city that has experienced historic ground settling, as evidenced by tilting streets, roadway cracks and other settlement features. Project surveyors detected additional settlement during dewatering for the access shaft. If dewatering was a factor in the observed additional settlement, the footprint of the dewatering-related deformation could extend beyond the expected boring-related zone of influence and therefore may not be fully covered by the installed ground-based survey networks being monitored by WSDOT and the project’s prime contractor.

With funding provided by the U.S. Department of Transportation and the Office of the Assistant Research and Technology, MDA participated in a program for Advanced space-based InSAR risk analysis of planned and existing transportation infrastructure. MDA undertook a subsidence-monitoring study, using HDS-InSAR techniques that adaptively optimize spatial resolution while resolving infrastructure, roads and open areas.

For the study, MDA selected two RADARSAT-2 Spotlight image stacks from opposing look directions that were acquired over the project site from 2012/06/06 to 2015/02/15 at 24-day intervals per stack. This period corresponds to 10 months before the start of tunnel boring, the initial boring phase, and the subsequent construction of the rescue shaft and associated dewatering.

Two RADARSAT-2 Spotlight stacks from opposing satellite pass directions enabled 2D-decomposition of deformation estimates. Spotlight data have a resolution of 1.6 meters in slant range and 0.8 meters in azimuth (i.e., along satellite track) directions. These data were multi-looked during processing to produce images that have approximately three-meter resolution in ground range and azimuth directions. The ground footprints of the two stacks and the 8.7-square-kilometer-processed area of interest include the southern two thirds of the planned tunnel and surrounding area.

The tunnel study focuses on a small area, but the same level of asset detail could be derived using HDS InSAR over an area spanning West Seattle to Bellevue in the east. The value of such cost-effective, broad-area asset monitoring is significant when so much urban infrastructure is reaching the end of its service life, and city budgets for monitoring and repair are shrinking.

Additional data required for InSAR processing include a digital elevation model (DEM) for topographic phase correction, and ambient temperature data for estimation and removal of deformation due to thermal dilation of rigid structures. The DEM used was a 1/9 arc-second LiDAR-derived DEM from the National Elevation Dataset courtesy of USGS. Mean daily temperatures recorded at the airport provided the thermal basis function for temporal component analysis. 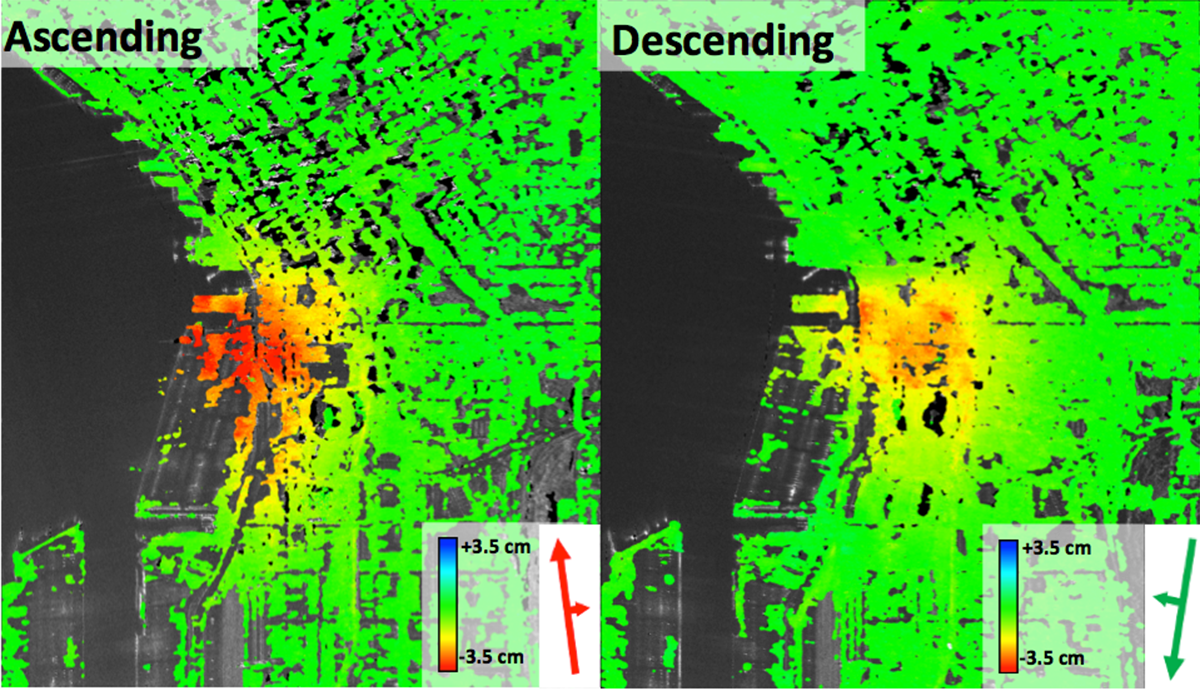 The ascending line-of-sight subsidence appeared greater in magnitude than that for the descending geometry, with a several-hundred-meter east/west shift in the pattern centers between the two geometries. The difference in view geometries between the two stacks explains the shift. Both view geometries showed broad subsidence patterns, with a spatial extent of approximately one square kilometer in the immediate vicinity of the rescue shaft.

According to component coefficient maps and the model residual Root Mean Square error map for the vertical deformation component, the peak rate is -15 centimeters/year, corresponding to -4.4-centimeter deformation during the 3.5 months after dewatering commenced. The linear component map shows many smaller areas with vertical deformation, including the north/south-oriented rail line running through the center of the area, along the existing viaduct and some buildings east of the rescue shaft. Deformation rates generally are less than -0.5 cm/year. The vertical thermally correlated component is shown for completeness. 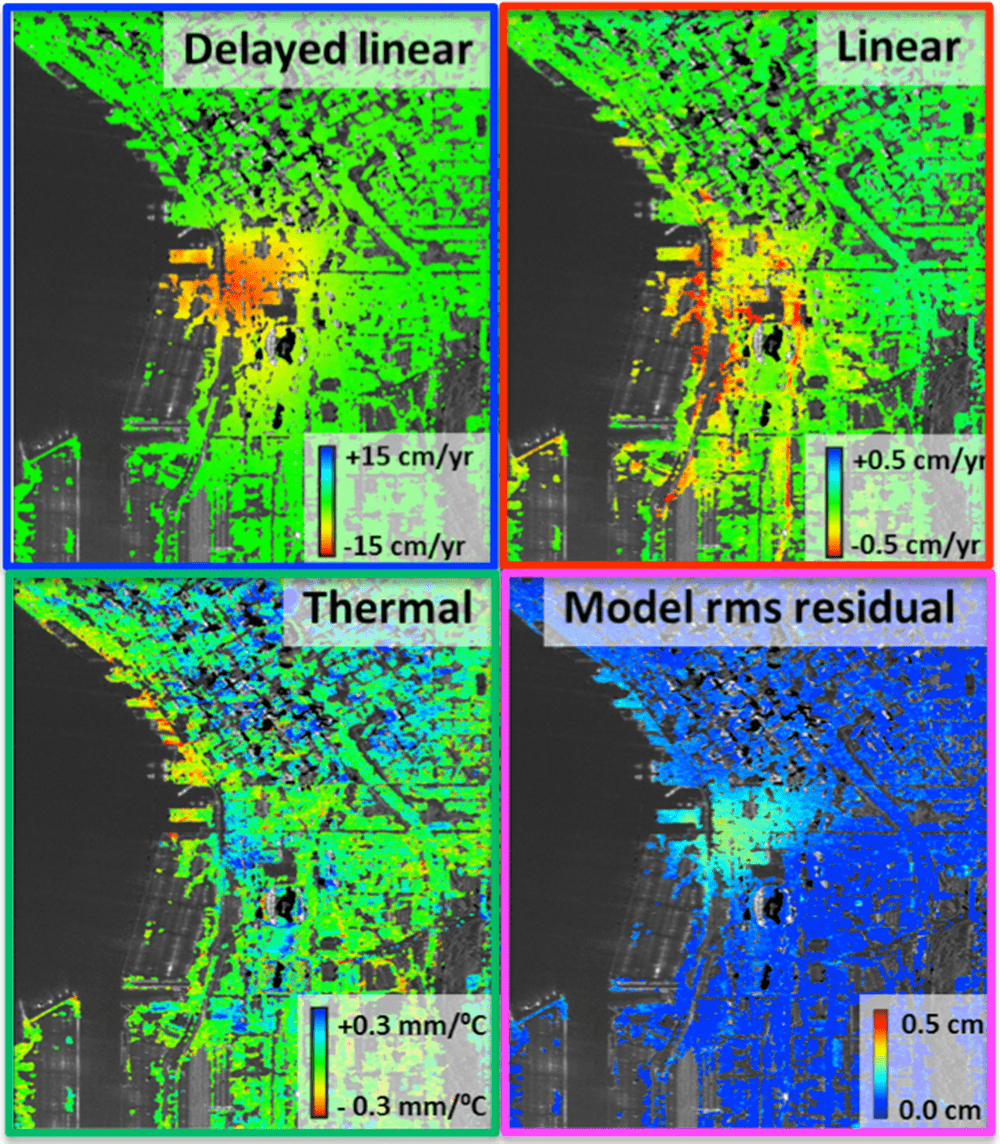 These results indicate a complex and significant deformation occurring at and near the rescue shaft excavation to facilitate tunnel-boring machine repair as well as significant dewatering of the surrounding aquifer. The deformation includes a long-term component and a more-recent dewatering-correlated component. These include vertical and east/west components, and are likely to include a north/south component not estimated due to sensor view constraints.

For future site analysis, MDA will include the use of Pictometry-based building-height data to generate an improved digital surface model that will improve InSAR phase modeling and geocoding in layover areas. Improved temporal modeling will better match nonlinear subsidence patterns near the rescue shaft. More-recent RADARSAT-2 images will support further analysis, with a focus on boring-induced subsidence after resuming tunneling operations.

More than half the global population now lives in cities. In the developed world, maintaining and replacing aging infrastructure is a priority, while in the developing world rapid urbanization and a projected increase of more than 1 billion urban dwellers during the next 20 years is the biggest challenge.

Selected examples of 2D deformation estimates are superimposed on a vertical linear component coefficient map for each point, and the time histories are shown with the thermal model component removed. (Credit: © MDA Geospatial Services Inc.  – All Rights Reserved.)

As traditional monitoring methods struggle to keep pace with the rate of urban change, it’s clear a new, cost-effective and responsive means of monitoring citywide infrastructure and planning new construction is required. For city engineers, the basis of effective decisions starts with access to accurate, timely information such as high-resolution HDS-InSAR wide-area data. The ability to rapidly define those areas affected by deformation to conduct targeted in-situ monitoring makes better use of limited engineering resources and saves critical infrastructure from irreparable damage.

The aforementioned HDS-InSAR study is the product of a simple, routine monitoring program from space that empowers planners and engineers with critical information on their infrastructure far more rapidly, efficiently and economically than traditional monitoring methods. From small, focused studies to citywide monitoring, HDS-InSAR is a viable means to routinely assess problems and prioritize appropriate responses.

Author’s Note: The views, opinions, findings and conclusions reflected in this article are the responsibility of the authors only and do not represent the official policy or position of the USDOT/OST-R, or any state or other entity.