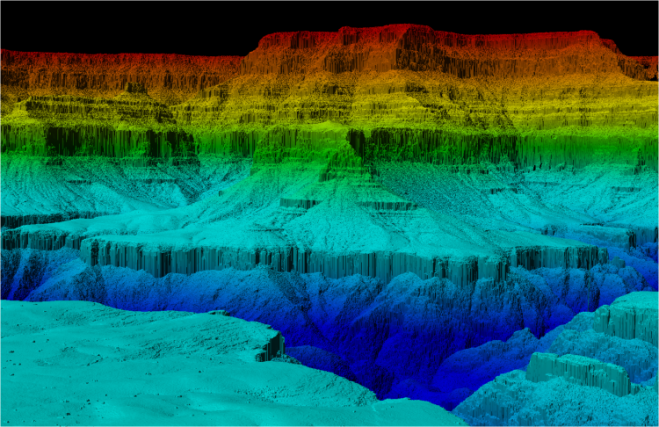 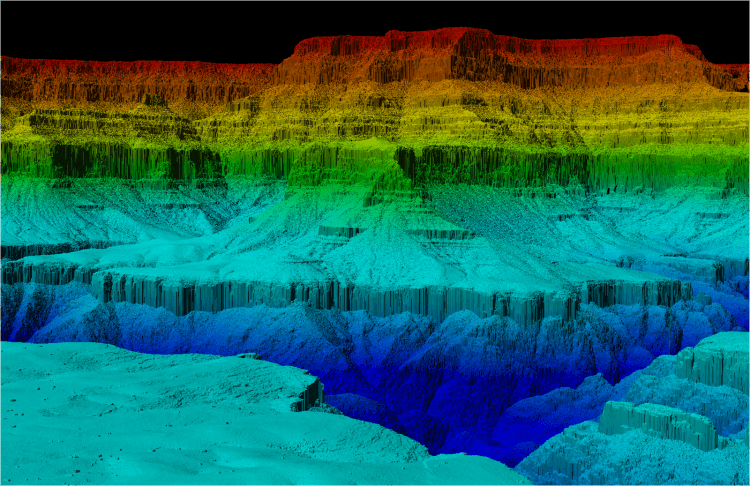 Geiger-mode LiDAR produces highly detailed topography, such as this scan of the Grand Canyon

Light detection and ranging (LiDAR) technology refers to a radar system operating at optical frequencies that uses a laser as its photon source. There are many varieties of LiDAR in operation, performing different missions.

Some LiDAR systems, such as the U.S. Army Corps of Engineers’ Scanning Hydrographic Operational Airborne LiDAR Survey (SHOALS) and the Compact Hydrographic Airborne Rapid Total Survey (CHARTS) deploy LiDAR using wavelengths that are optimal for collecting shallow bathymetry and other data needed for detecting obstacles to navigation. Other systems, including most of the commercial systems, are focused on topographic mapping and used to make a map or 3D image of locations on Earth.

Most notably, traditional LiDAR lasers shoot single, high-powered beams of energy that  strike a single
location on the surface. Depending on altitude, these systems illuminate ground points of 1 meter to a half meter in size with a single hit. The beam reflects off the surface and returns to the sensor for range (elevation) measurement. Vegetation and other surface features may break the beam into multiple return signals or block it entirely, leaving a void in the data set.

Geiger mode operates with lower energy at higher altitudes and still captures a much denser point spacing than linear-mode systems. In Geiger mode, the sensors don’t observe individual laser beam returns, but rather the returns of individual photons. The electronic circuitry associated with the receiver produces a measurement corresponding to the time that a current is generated from an incoming photon, resulting in a direct time-of-flight measurement. This allows sensors to collect a much higher density of measurements with far less power from higher altitudes and over larger geographies.

Various federal agencies, including NASA, the National Geospatial-Intelligence Agency, the Air Force Research Laboratory and the U.S. Army Geospatial Center, have experimented with this new breed of LiDAR, and operational experiments have been conducted with several different sensors and platforms. Now a new airborne Geiger-mode LiDAR system has been developed that can collect up to 100 elevation points per meter (ppm) and deliver fully automated end products. Designed by Harris Corp. for fast and affordable wide-area mapping, the sensor and high-volume processing capability are a commercial version of LiDAR technology that Harris developed with the U.S. government and has operated around the world for more than a decade.

“Geiger-mode technology allows us to fly much higher than traditional LiDAR and collect data up to 10 times faster,” says David Kornick, director of Geospatial Solutions for Harris. “This is a cost-effective solution for geospatial end users in commercial and federal civil sectors who need high-resolution elevation data collected over large geographic areas.”

“In 15 years of Geiger-mode operations supporting the U.S. military, we have fine-tuned the processing of massive LiDAR data sets with a fully automated workflow,” says Kornick. “We can generate any standard elevation product in as little as a day at either our dedicated facility in Florida or on site using one of our portable processing units.” 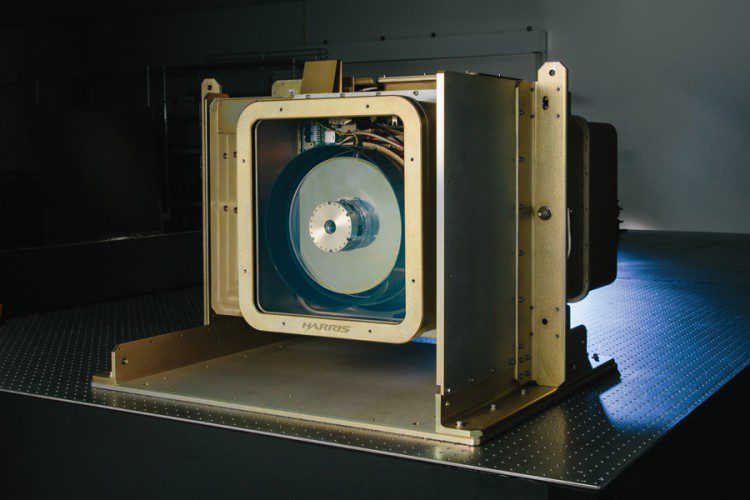 The Harris LiDAR has a 32 by 128 array that collects 4,096 elevations every time it flashes the scene with the laser, which is 50,000 times per second. This equates to more than 200 million samples per second. Each square meter of terrain can be sampled (interrogated) thousands of times in a single over flight.

The Harris service can capture between 2 ppm and 100 ppm, although the company plans to fly most projects at an optimal altitude of 29,000 feet above ground level, yielding 8-ppm resolution over a 5-kilometer swath width. The IntelliEarth sensor is designed to fly in a pressurized twin-engine propeller or jet aircraft. For commercial projects, the average airspeed will be 290 knots, which is twice the speed and at much wider swath than traditional LiDAR sensors.

The design of the IntelliEarth Geiger-mode LiDAR sensor also lends itself to extremely accurate data production. Pulsing at 50,000 times each second, the array illuminates the surface in a circular pattern. As the aircraft flies forward at high speed, the circles overlap. With a standard 50 percent overlap in flight lines, points and features on the ground are measured thousands of times from multiple angles (front, back and sides). This allows for a more robust calibration process that results in extremely accurate elevation calculations.

Romano added that such dense illumination of the surface yields two other major advantages for Geiger-mode technology. The first is penetrating even the most heavily vegetated environments to score more hits on Earth’s surface in this environment. With so many pulses covering the tree canopy from every direction, energy has a higher probability of slipping between leaves and branches. This provides more data, which in turn improves bare-earth elevation products and canopy models used in forestry and other scientific applications.

Another important advantage of the technology is that there are no voids in the data sets caused by building shadows or deep valleys. Although linear-mode systems typically illuminate from one angle on a given flight line, Geiger-mode LiDAR’s 360-degree surface illumination nearly guarantees that neither tall man-made structures nor deep ravines can shield a surface point from being struck by the LiDAR photons and returning a signal to the airborne instrument.

LiDAR data collection traditionally has been a long and expensive process, due in part to the low altitude and slow airspeed required for linear-mode systems, according to Romano. A good example of this is a plan announced by the U.S. Geological Survey (USGS) to capture LiDAR data for the entire United States. After 20 years, the program has covered just 28 percent of the nation’s land area. The minimum goal of the new USGS 3D Elevation Program is to map the entire nation at 2 ppm, of which less than
7 percent is currently covered. With Geiger-mode LiDAR, this can be accelerated dramatically with a higher quality of 8 ppm.

“The other bottleneck in LiDAR mapping traditionally occurs in data processing,” says Romano. “LiDAR point clouds are enormous data sets that require a lot of time to process, calibrate and filter into usable products.”

Geiger-mode data sets are much larger than those collected by linear-mode systems. As a result, accelerating data throughput was a priority for Harris when it first began operating Geiger-mode systems for the U.S. government years ago. The company has developed a processing engine that uses advanced blade server technology and an auto-mated workflow to handle enormous data sets quickly.

“With linear-mode data, the workflow typically involves processing the raw data and then calibrating and filtering the data to ground [bare earth],” says Romano. “With our IntelliEarth processing, we push the button, and the point cloud is automatically calibrated and filtered in as little as 24 hours after collection.”

From there, the processing segment can generate any of the standard end products typically derived from LiDAR point clouds, including digital elevation models, digital surface models and 3D vectors.

Harris maintains a primary processing facility at its Melbourne, Fla., headquarters and plans to establish identical capabilities at other locations worldwide where its Geiger-mode LiDAR aerial sensors will be stationed. In addition, the company has developed a self-contained, portable processing segment that can be shipped on commercial airliners and set up onsite for immediate processing in remote locales.

Expanding the Market for LiDAR

With IntelliEarth’s entrance into the commercial market, Harris is developing new value-added products as well as specialized data analytics services that will cater to geospatial customers in private sector and government civil markets. The company is also establishing a global network of channel partners that will sell raw data, processed elevation products and application-specific solutions.

The company expects civilian government agencies at the federal, state and even county levels to be among the first to use the IntelliEarth offerings. These organizations manage large areas of land that must be mapped affordably and accurately. Specific applications for LiDAR-derived elevation products in these government markets include floodplain modeling, transportation infrastructure planning, agriculture, forest monitoring, defense and other scientific applications.

The demand for fast and affordable wide-area collects is expected to come from the private sector as well. Energy firms and utilities already are major users of LiDAR products, and they often have the need for elevation maps covering large geographic areas. Utilities will especially find the dense point spacing of the IntelliEarth products appealing for projects that require high-resolution extraction of infrastructure features from LiDAR point clouds such as buildings, roads, power lines and towers. Commercial foresters; insurance companies; and mining, waste management, remediation and environmental firms will also benefit from this information.

“We expect that 3D mapping of these features from the IntelliEarth products will be much faster and less expensive due to the increased use of automated extraction software,” says Romano.

He explained these automated packages aren’t widely used with traditional linear-mode LiDAR point clouds because the point density is insufficient to detect the edges of features accurately. Manual extraction, which is time-consuming and expensive, is often the only method available. However, automated extraction becomes very accurate when the point cloud density is 8 ppm or higher, as is the case with Geiger-mode technology.

According to Kornick, the system’s speed and affordability will open the market for LiDAR monitoring services that can be provided on a periodic basis. For example, electric utilities are mandated to keep extensive power line corridors free from vegetation encroachment, an endless and expensive task. Geiger-mode technology can accomplish this quickly at a cost that makes periodic monitoring practical. Kornick predicts Geiger-mode technology will expand the overall LiDAR market because the new products and services derived from it will appeal to non-traditional customers, drawing them into the market for the first time.