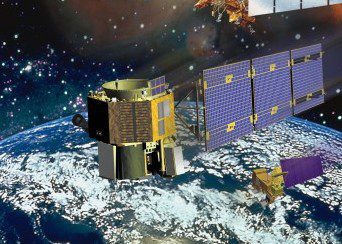 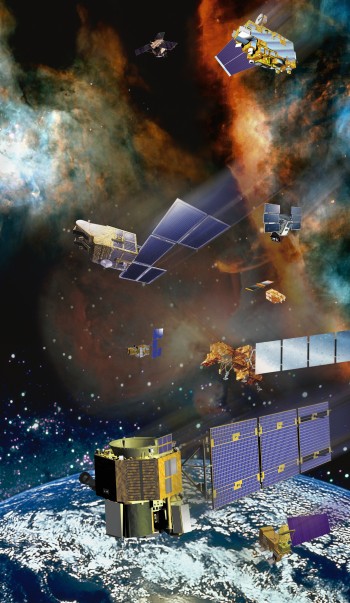 Competition is expected to heat up in the global Earth observation data market, with an ever-increasing number of satellites and new companies looking to expand their business.

From 2004–2013, 162 Earth observation (EO) satellites were launched by civil government and commercial entities from 33 countries, plus the European Space Agency (ESA) and the European Organisation for the Exploitation of Meteorological Satellites (EUMETSAT). This generated $19.5 billion for the satellite manufacturing industry.

These numbers are set to grow, as detailed in Euroconsult’s recent market report Satellite-Based Earth Observation: Market Prospects to 2023. More than 350 satellites are expected to be launched from 2014 to 2023, resulting in around $36 billion in manufacturing revenues during the period (an 85 percent increase from the previous decade).

Indeed, the supply of EO solutions continues to expand and diversify: Kazakhstan, Venezuela and Vietnam have become the latest countries to launch an EO satellite. Newcomers seek to deliver solutions to respond to national government policy interests, assist in developing a national space infrastructure and expand current commercial data offerings.

The average cost of an EO satellite is expected to decrease because of the number of satellites expected from developing EO programs (often using off-the-shelf solutions) and the lower-cost constellation approach advocated by companies such as Skybox Imaging and Planet Labs. However, for science-driven missions and commercial missions with a defense focus, such as the WorldView series from DigitalGlobe, satellite unit cost is expected to remain comparable between decades, with the higher costs required to support research and development into new/improved sensor design.

Export opportunities are expected to increase, particularly in countries that lack an autonomous industrial base. Procuring a first-generation EO satellite continues to be the cornerstone for countries willing to acquire space-related technological and industrial capabilities, as EO is the favored first step for initiating activities in the space sector. In these cases, purchasing an EO satellite often goes hand in hand with technology transfer or localization with established satellites. A further export market takes a more direct procurement approach, for instance for countries requiring satellites to fulfill a defense/dual-use role. 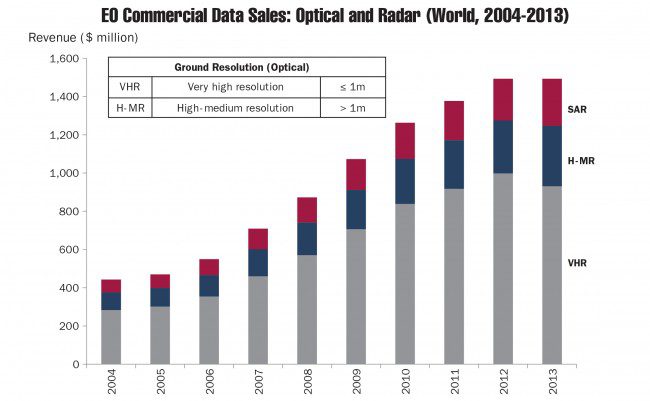 Government supply continues to grow strongly as more countries expand their portfolios of EO satellites to meet various policy needs. This is especially evident in developing and emerging EO programs as countries launch satellite capacity to develop a local industrial base, create the building blocks for a space program, obtain greater autonomy in data acquisition and/or meet local demand for data and services.

Government investment in EO and meteorology reached a high in 2013 at $8.7 billion, a 13 percent increase from 2012. This represents the eighth year of continued investment growth, with EO remaining a priority for government space expenditures. Key issues such as environment monitoring and climate change are top priority areas in political agendas, and EO programs provide governments with efficient solutions to address these issues.

In total, 51 countries globally are investing in EO satellite programs and/or services development. Europe and North America remain the largest centers for investment; however, these programs have experienced relatively flat budgets. This is offset by the growing investment in rapidly developing EO programs, such as in India and South Korea, and a return to higher investment in countries such as China and Russia.

In addition, EO remains the first application for emerging space programs. Such programs often are developed within the wider framework of a technology-transfer program with established industry or agency partners to assist in developing domestic industrial capabilities and support further program advancement.

The commercial data market totaled $1.5 billion in 2013; this represents 0 percent growth from 2012, as the impact of reduced U.S. government spending took effect (2013 being the first full year of reduced spending with the Enhanced View service-level agreement). However, the level of the U.S. defense outlay disguises growth elsewhere in the market, particularly in sales to non-U.S. defense users. Such sales totaled $560 million in 2013, with a 14 percent compound annual growth rate (CAGR) during the last five years.

Enterprise markets (civil government and private sector) are also growing strongly, at 14 percent CAGR during the last five years. These non-defense markets have been slower to develop, as proving cost-benefit remains a challenge and global austerity measures continue to negatively affect civil government. Thus, EO solutions are being adopted more slowly in several potentially key markets, including energy and agriculture.

Several factors present a more positive outlook. For instance, exposure to EO solutions is increasing in countries and regions with a high need for geospatial data but limited local solutions. Data demand in Latin America, Asia, Russia and the Commonwealth of Independent States is experiencing strong double-digit growth, with requirements in natural resources and energy as well as defense. The engineering and infrastructure sector also continues to develop strongly, with applications such as urban planning, detailed cartography, etc., to support development. In addition, demand in sectors such as location-based services is developing quickly and extending to applications that support business and market intelligence. 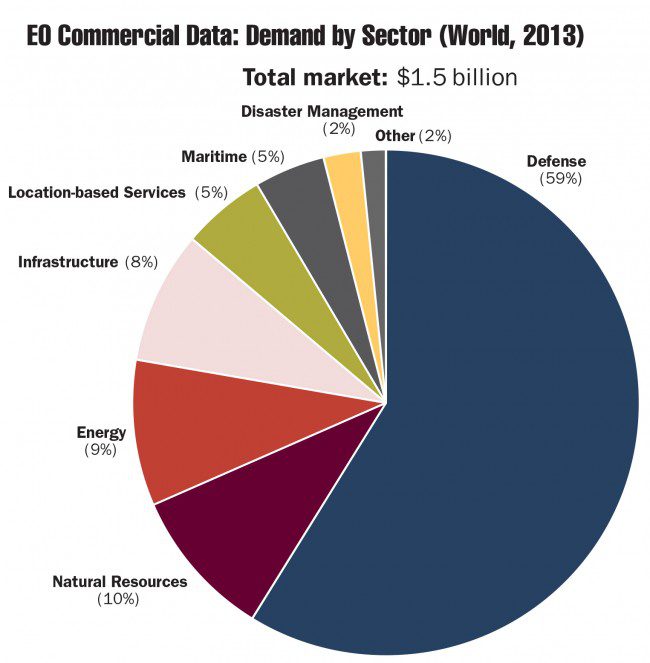 Meeting the demand is a growing commercial supply from private-sector initiatives and government commercialization of proprietary systems. By 2016, more than 50 satellites are expected to be in orbit offering commercial data. Although increased competition is expected, despite the number of commercial solutions available, more than 50 percent of data sales are attributed to just two companies: Airbus Defence and Space and DigitalGlobe.

New entrants into the market may find it difficult to compete with longer-standing companies with proven solutions, developed distribution networks and returning client bases. To compete, new entrants, as well as existing actors adapting to the new competitive environment, will need to carefully position themselves, with trade-offs in ground resolution, revisit times, geolocation accuracy and data prices.

Although Skybox Imaging doesn’t offer the same ground resolutions, its higher temporal resolution (revisit) allows the company to exploit other application areas focused on more continuous change detection. Skybox Imaging and Planet Labs will be expected to offer high temporal resolution once their constellations are fully deployed. Both can also be expected to be competitive in terms of price, with the potential to be disruptive. However, Skybox Imaging’s strategy remains to be confirmed following its recent acquisition by Google.

While not guaranteeing market evolution, the emergence of low-cost constellations focusing on revisit has the potential to further open application areas requiring weekly (or daily) revisit at high to moderate resolutions. Such services have struggled to develop in the past because of an inability to guarantee more continuous data acquisition due to constrained revisit, satellite priority access controls and atmospheric effects. Other new entrants, particularly in the domains of commercial meteorology and environmental monitoring solutions, could follow suit in the next decade.