Drones: The Market Behind the Buzz

Unmanned aerial vehicle (UAV) companies have found themselves at the center of a fast-growing, billion-dollar industry. Drone technology, initially designed for military reconnaissance, has started hovering around the agriculture industry while creating solutions for a healthy ecosystem of additional commercial markets.

Much has changed since PrecisionHawk launched its first UAV platform more than five years ago. The early model”a four-pound, fixed-wing plane dressed up like a hawk”was used to scare pesky birds away from vineyards. However, the company soon learned that viticulture was just a small subset of a data-hungry agriculture market that was embracing the precision-agriculture movement.

The power of more and better information could revolutionize entire industries, from emergency response to energy, but the agricultural industry has people particularly excited. Agriculture is an extremely data-intensive industry that's beginning to rely on remote sensing to accurately measure annual performance.

Commercial use of UAVs might be the ticket, and the Federal Aviation Administration (FAA) is on the right path as it draws closer to opening U.S. airspace. But the drone itself is just the first part of the pipeline.

Although there has been talk about smart farming for many years, growers often have viewed integration as a cumbersome and complicated process. UAV hardware simplifies this process substantially by eliminating unnecessary steps in the field, but the proper software and analysis tools are essential for the next steps in the management system. 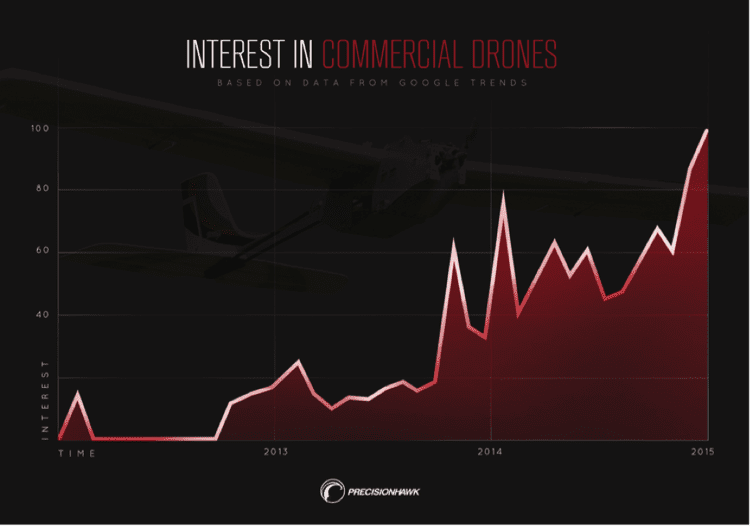 According to the Association for Unmanned Vehicle Systems (AUVSI), the UAV market is estimated at $11 billion and is expected to grow to $140 billion during the next 10 years. As UAV operations shift to the commercial market, speaking from experience, agriculture seems to be taking the lead andÂ is expected to capture approximately 80 percent of the known market.

Of course, other industries are cognizant of the recent advancements and wide array of use cases that drones bring to the table. In the last 18 months, PrecisionHawk has seen interest from other billion-dollar sectors such asÂ insurance, utilities, emergency response, mining and life sciences. 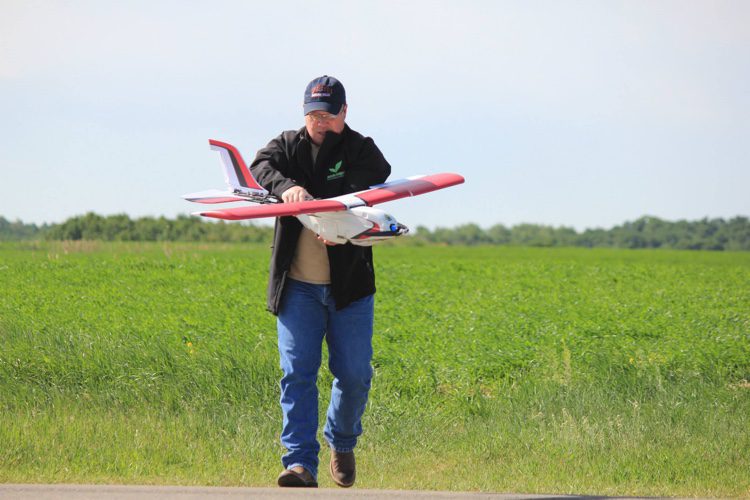 Logan Bitz of South Country Equipment, which sells agricultural supplies, brings a PrecisionHawk drone in from a successful flight.

Innovation comes from the need to address an existing problem or process that has proven to be inefficient. The same applies to agriculture and the integration of drones and data. Traditional methods have resulted in a decrease in productivity and contributed to major environmental issues such as drought due to inefficient water use and allocation.

In the next 40 years, the world's population is set to increase from 7 billion to more than 9 billion people. To meet this growing demand, agricultural producers will have to increase food production by 70-100 percent. This all needs to happen in a world with increasingly unpredictable weather patterns, ever-rising farm-input costs and limited land to grow on.

In response to this need to produce more with less, farmers have learned that by collecting data in their fields, they can potentially decrease inputs and increase outputs.

Historically, aerial surveying methods, such as satellites or manned aviation, have been used to collect on-farm data, but those technologies often are attached to high costs, untimeliness and poor ground resolution. By adding drones to their arsenal of farm equipment”as seamlessly as one would introduce a new tractor to the farm”farmers can collect real-time data at high-definition ground resolutions and cut costs in the process.

NDVI is the most common vegetation index and is widely used for satellite and airborne monitoring. It provides best results from early- to mid-growth season and is correlated with leaf-area values and plant vigor.

With the FAA seeking to build the most-competitive regulatory environment for drones, UAVs will inevitably become a viable business tool in the future.

In the same regard, precision agriculture is the future of farming, but for growers to fully adopt this technology, they need a reliable hardware and software system that delivers actionable insights.

Demand should increase for solution-based technologies focused on core agricultural practices. Precision-agriculture professionals with deep knowledge in this field will have an advantage when it comes to developing tools and algorithms that can turn data into usable information. 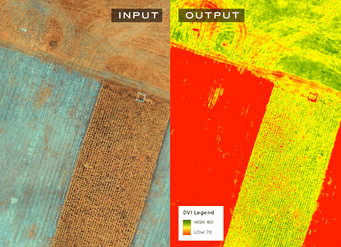 NDVI is the most common vegetation index and is widely used for satellite and airborne monitoring. It provides best results from early- to mid-growth season and is correlated with leaf-area values and plant vigor.

In terms of maneuverability, UAVs are either autonomous (programmed with an extremely high level of artificial intelligence onboard, allowing them to operate autonomously) or radio-controlled (as seen in many hobbyist platforms in the market). In theory, both types can collect data, but the key differentiator is onboard intelligence, which ensures the collection of quality data to make better decisions. Autonomous UAVs, equipped with onboard flight-diagnostic software, can detect and adjust to highly volatile elements such as weather and wind speed. By eliminating the human touch point, autonomous UAVs operate with a much lesser degree of error.

On the other side of the spectrum, UAVs also are classified according to their wing configuration”with rotary and fixed-wing being the most widely used. Fixed-wing drones assume the typical airplane design and fly a preprogrammed flight path. Rotary types, with their multi-component propeller system, can move in several directions”a feature that's essential in unique applications involving more-pointed inspections.

It's a common misconception that more data equates to more information. In truth, actionable information can be attributed to a few elements such as data quality, back-end analysis efficiency and, more importantly, sensor choice.

Picking the right sensor for each application is like activating human sensory receptors. Can we determine if a surface is rough by smelling it? We can try, but it won't work. Our decisions are shaped by what we're able to sense, and because sensation is the foundation of cognition, picking the most-appropriate sensor suite for a certain application is no different.

In these early days, visual and multispectral sensors are seeing the most traction in terms of use cases across a network of major industries. This increased interest has sparked the development of more options than ever before.

UAVs typically collect data using a visual multispectral sensor, but to make informed decisions, it's import to have proper information processing and GIS analysis. Each part of the pipeline needs to fit together to provide value. If all the pieces are in one platform, it eliminates confusion and increases efficiency. 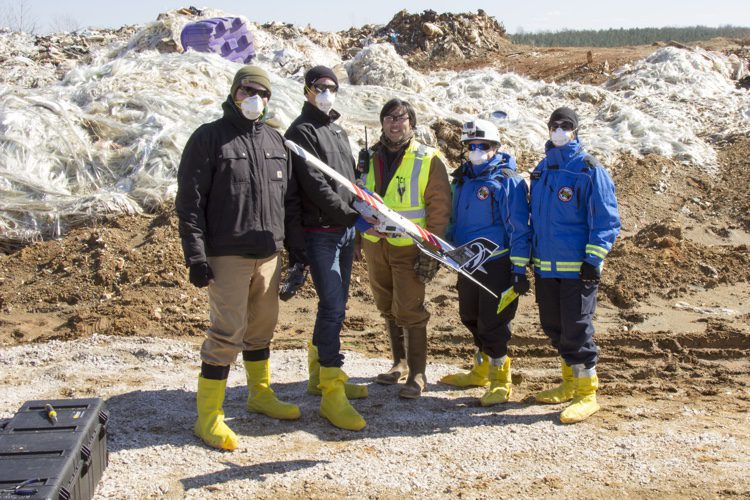 PrecisionHawk conducted an aerial survey over the Bennett Industrial Landfill in Lockhart, S.C., where toxic particulates were being released into the air.

Corporations and small businesses are progressively joining UAV manufacturers in assuming a data-first mentality. In the last year, PrecisionHawk noticed a steady uptake of clients primarily looking for highly efficient solutions that solve specific problems such as anomaly detection or disease identification. At the end of the day, aerial images don't mean much if they don't deliver insights”like measuring crop health and indicating problem areas”that directly contribute to business strategy, operations and planning.

The challenge most-often faced is communicating to customers that the system will work with a farm's operational flow. The UAV platform is much more valuable than just pictures stored on a memory card”it provides actionable information immediately, and educating and highlighting this fact to users is key. You don't need to be a pilot or aerospace engineer to use this technology.