Changing the Landscape of Impervious-Surface Mapping 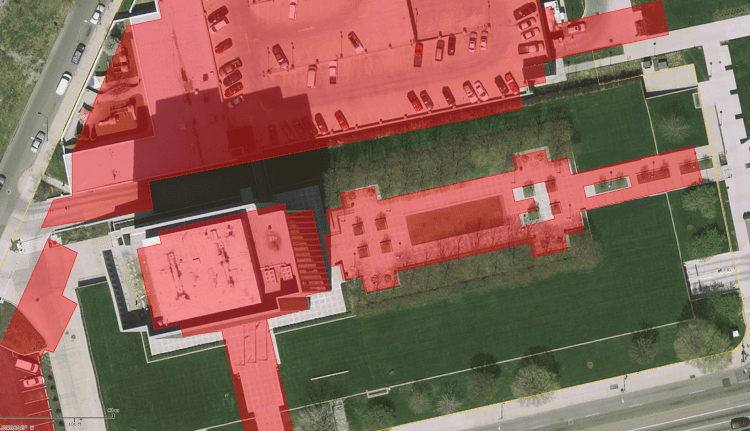 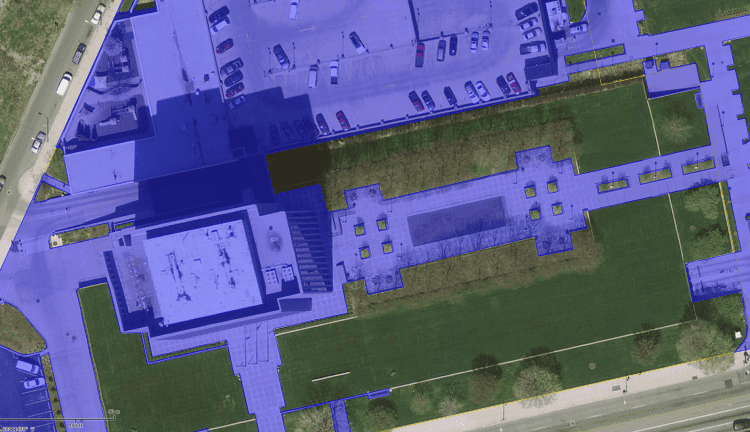 A before image of Dayton, Ohio, shows a previous impervious-surface dataset represented by red polygons with fewer data accuracies. An updated after image in blue is more accurate and representative of the city's impervious surfaces.

Urban growth adversely affects the natural environment in many ways and requires a variety of strategies and tools to mitigate its impact. Impervious-surface mapping is one such tool.

By measuring the surface area of compacted earth and man-made construction (e.g., pavement, concrete, rooftops, buildings and other impervious surfaces), municipalities and other regions can predict and address the path of stormwater runoff.

Impervious surfaces exacerbate the problem of runoff, notes Daniel Ngoroi, a geospatial team leader at Woolpert, a national architecture, engineering and geospatial firm. The fewer impervious surfaces there are, the more chance there is of water percolating; there's more absorption and less runoff. It's the cumulative effect of runoff that creates issues ranging from pollution to flash flooding.

To help mitigate negative runoff, impervious-surface mapping has been conducted for many years throughout the world, primarily in densely populated urban areas.

Recently, innovative breakthroughs in orthoimagery and LiDAR created the ability to produce more-precise and defensible impervious-surface maps of areas from large cities to rural landscapes, such as the Pennsylvania Lake Erie Watershed.

These new technologies produce data that can be used for multiple purposes and require fewer resources to create. Such efficient mapping methods then can be combined with data culled from other projects to save local governments and taxpayers time and money. 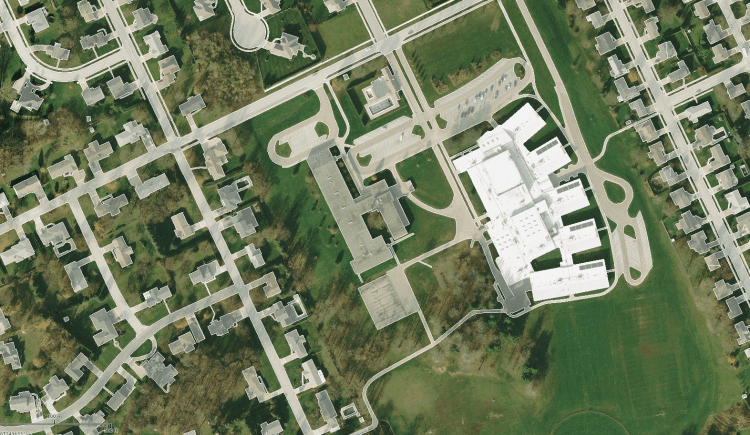 The need for impervious-surface mapping has been around since modern cities evolved. Roughly 150 years ago, cities were set up with sewer systems that combined storm and sanitary waste.

One pipe would do both jobs, and it all would go to the river, says Mike Merchant, a geospatial project director at Woolpert. Since then, there has been a push to separate stormwater from sanitary waste. The EPA (U.S. Environmental Protection Agency) has entered into consent decrees with cities to address that separation.

The EPA mandates that municipalities employ these consent decrees, which often are funded by taxpayers, to protect the environment and citizenry.

Stormwater picks up a lot of contaminants, notes Merchant. For example, there may be chemical pretreatment on parking lots, automotive contaminants like oil and gas on the roads, etc., that are then absorbed into the runoff.

The maps help calculate the quantities of water coming off the parking lots, roads, buildings, etc., and how much rainfall would be expected to collect in what areas, he adds. The maps help determine where and how storm pipes drain, and how that could impact the environment.

To produce such maps, firms traditionally were hired to take aerial photographs. They would then manually measure square footages, and digitize where buildings and other impervious surfaces were located to see where natural-resource mitigation was required.

But recently, advanced remote-sensing tools have been developed to create these maps. The data then are combined with existing parcel databases, which had been collected for other city and county projects, to provide comprehensive information that can be applied for multiple uses and solutions. 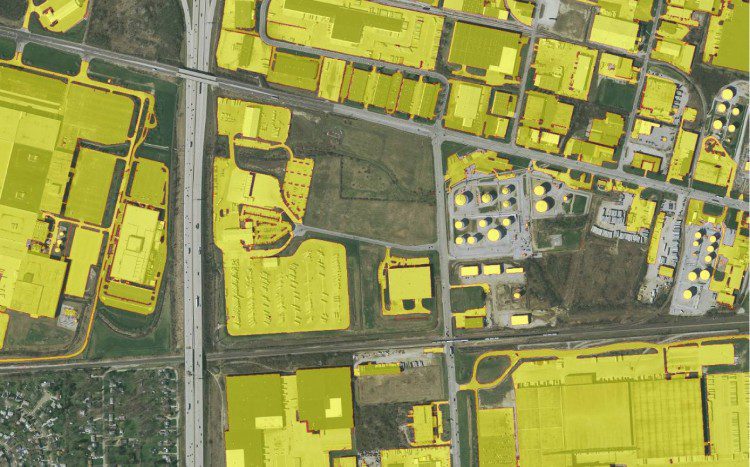 Merchant was the GIS manager of public utilities for Columbus, Ohio, when the city hired Woolpert to conduct its impervious-surface mapping in 2008. The company had provided similar services to Columbus in the late 1980s, but with this project, the city wanted to do something different.

Millions of infrared laser pulses are fired from the aircraft-based sensor, hit the surface and are reflected back to the sensor, where the x, y and z location and intensity value of the reflected surface is recorded, notes Merchant. This allows you to determine whether that surface is gravel, asphalt, roof or otherwise, and then you have your imagery to overlay that value.

This technology offers more LiDAR points, which collect an accurate reflection of the impervious surface data required to create the map. The previous method incorporated the lean of buildings and other aboveground features, which often skewed the data produced.

LiDAR has an elevation as well as an intensity component, along with red, green, blue and infrared imagery, adds Ngoroi. You combine that into a data stack, and then apply object-based data-analysis techniques that extract features of interest out of that data stack.

The idea is to leverage the inherent characteristics of the data that aren't obvious to the human eye.

Before, we were limited to what the imager could see, says Ngoroi. But this is what the computers are so good at”what you can't see with the human eye. The new method removes the human element that's prone to bias and error and fatigue.

The machine is trained to go through algorithms to identify, delineate and extract features of interest in a consistent manner. Also, by using this semi-automated system, municipalities can devote fewer resources to the process.

It's much faster than traditional collection, and you can do the whole dataset, notes Merchant. That project led to Woolpert reinventing the impervious-surface mapping process.

The meticulousness of the high-resolution data also makes these maps scientifically defensible per research as well as federal and state standards.

This is the new technology of impervious-surface mapping, says Merchant. This data is so accurate, it makes previous mapping pale by comparison. 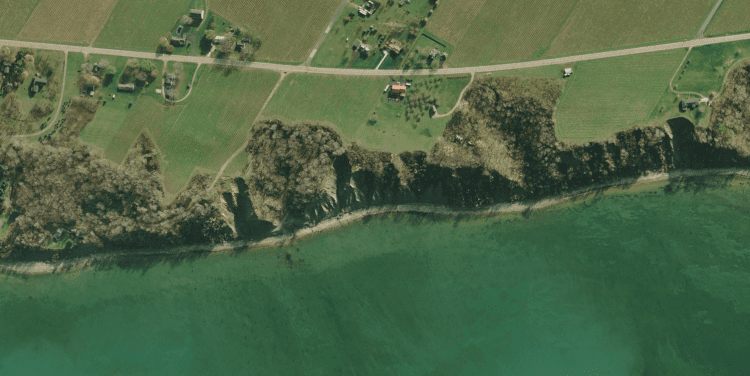 Images show sharp erosion along the beach of Lake Erie in 2012 (top) as well as vegetation-line erosion in the lake's dunes (bottom).

Impervious-surface mapping is used as a component of watershed planning and restoration project identification, according to Sean Rafferty, a senior research specialist with Pennsylvania Sea Grant, which is supported by the National Oceanic and Atmospheric Administration (NOAA), The Pennsylvania State University, and the Commonwealth of Pennsylvania. He added that impervious cover changes year to year, based on the amount of development in the area.

We use biological, chemical and physical data to assess stream quality, says Rafferty. These assessments help us better understand what is contributing to the impairment of our streams.

Prior to 2012, impervious-surface data more than a decade old was being used to assess the watershed, so Pennsylvania Sea Grant brought in several geospatial-related consultants to update this information. According to Rafferty, forming partnerships early is the key to collecting such data.

The old data measured surfaces at 30 meters by 30 meters, which is not very good resolution, notes Rafferty. Now we have six- by six-inch resolution data. With this small-site scale, we can tell exactly where the impervious surfaces are.

We approached Erie with the same methodology as we have the cities, adds Merchant. That's what makes it great”whether it's Columbus, Indianapolis, Springfield, Dayton”this methodology translates.

The Erie project showed that you can be environmentally proactive while setting up stormwater utilities, says Ngoroi. It's all about building systems to allow water to be channeled away so there's no property destruction or lives being lost.

By utilizing grant-funded imagery and LiDAR data, Woolpert was able to produce a new impervious-surface dataset without spending additional money and resources in data collection. And the new dataset illustrated severe erosion problems in the streams.

In Erie County, they're very big on the steelhead fishery; the streams have very clear water, says Merchant. Pennsylvania is a very aggressive, proactive state when it comes to the environment.

The project also illustrates the expanded funding possibilities for impervious-surface mapping. According to NOAA, there are a network of 33 Sea Grant programs in every coastal and Great Lakes state, Puerto Rico, Lake Champlain and Guam.

From a watershed perspective, like with Lake Erie which cuts across multiple states, the mapping can address problems such as algae bloom in the lake, says Ngoroi. If you look at it from an environmental standpoint, you can estimate how much of this runoff is resulting from impervious surfaces. That will help mitigate the pollution in the lake.

Out west, where flash flooding is of heightened concern, precise mapping can be the difference between life and death.

The more information you have makes your ability to build resilient communities that much easier, adds Ngoroi. And stormwater utilities can piggy-back on that same work.

Having us update the data every three years, with the technology to fill the gaps in between, is highly cost-effective, notes Merchant. There are just a handful of firms with this kind of expertise. When you create a stormwater utility, consultants preparing a stormwater plan prefer to keep that work as current and relevant as possible.

For the new watershed project, Rafferty said the crest lines are being used to calculate bluff recession rates along the Lake Erie shoreline.

Having the best available data produces the best science, adds Rafferty. Sea Grant is a science-based, non-advocacy organization. Decision makers use that science to inform their decisions.

This new technology allows us to save the taxpayer a lot of money, and it's easier to update, notes Ngoroi. Then you throw in the fact that the quick turnaround on the product makes it more relevant to studies and applications. It's a more-accurate reflection of the landscape and its potential impact”regardless of setting.

After mapping cities and watersheds, Merchant believes one map covering multiple areas and sharing a dataset could provide the best solution.

Everybody lives downstream somewhere, he says. By not managing the problem, it just pushes it off to someone else.

Rafferty stresses the environmental significance of stormwater management and the need for accurate guidance via impervious-surface mapping.

It's always best if you can get better, more-precise data to inform and guide restoration and protection, he adds. Then, having all the information in one dataset, rather than trying to put it together piecemeal, helps focus on the areas of the watershed most in need. You can prioritize efforts”you're not picking projects out of a hat.

Merchant believes the impact of this technology and its broad applications have changed the playing field in stormwater management.

Impervious-surface mapping has long played a role in protecting the environment, he said. The fact that these essential maps can be created more accurately and for less money is a win-win for all involved.

Jill Kelley is a writer for Woolpert; e-mail: Jill.Kelley at woolpert.com.