July 14, 2015
A New Age for Oil and Gas Exploration: Remote-Sensing Data and Analytics Are Changing the Industry 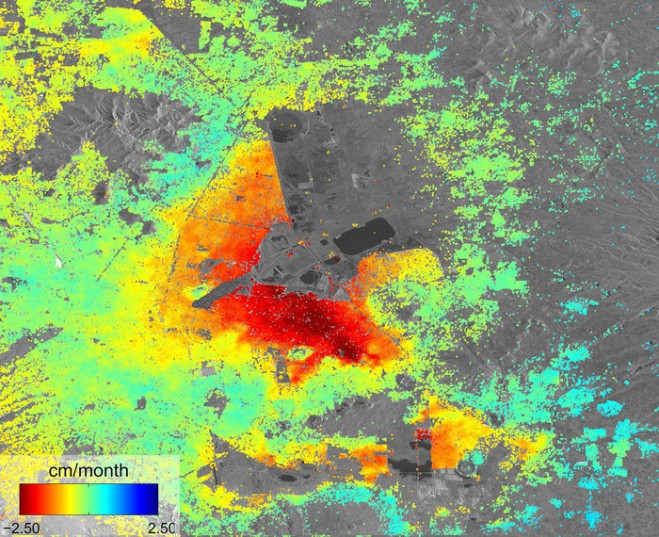 Understanding what’s happening beneath Earth’s surface is important for accurate reservoir and flow modeling, which leads to more-informed production decisions and the ability to produce more energy for less. The importance of such understanding helped refine magnetic and gravimetric data-collection methods as well as associated analysis tools for these data sources.

Through the years, surface and above-surface remote-sensing analytics faced several shortcomings in the O&G realm. The low spatial and spectral resolution of many data sources made it difficult to quantify and delineate spills, for example, or identify alteration minerals beyond a regional scale. Low revisit rates of many imaging platforms also is a barrier to broad-scale temporal analyses.

Although these barriers were real, they no longer exist. Modern imaging solutions include the following:

These data are available today, and modern analytics co-located with such data in an infrastructure-rich enterprise environment bring comprehensive solutions to the marketplace that previously weren’t possible.

These new data sources pave the way to think outside the box in how remote-sensing data are used across all disciplines within the O&G industry. For example, surface obstructions such as dense forest have historically been obstacles to finding geologic faults that would otherwise be exposed. But LiDAR sensors calculate multiple returns from an active laser scanner thousands of times per second, resulting in a 3-D representation of the ground. Pulses of light sent from a scanner may bounce off a tree or other object, or they may find the ground. As a result, faults that were previously undetected are easily revealed. LiDAR is used for high-resolution surface modeling to augment ground surveys, temporal analyses to identify surface changes over time before they become hazards, feature identification for infrastructure mapping, and hydrologic modeling to mitigate flooding or other water hazards around production sites. 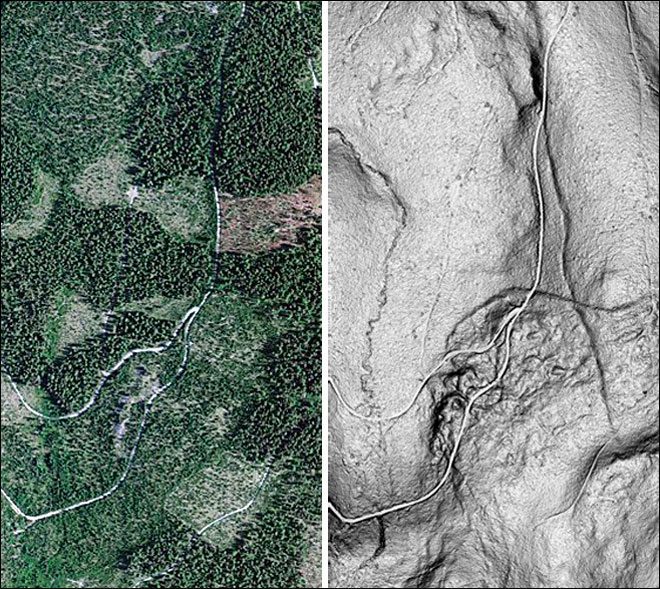 LiDAR isn’t the only pervasive data source for above-ground analyses that can facilitate lower cost to market and greater control over environmental impact. SAR data also are incredibly useful, because they can be used day or night and can also penetrate clouds. In addition, SAR images collected by the same sensor at different times enable the use of interferometric processing (InSAR), which is used to measure displacement to a very high degree of accuracy. Such measurable displacements range from small-scale land deformations to landslides and earthquake monitoring.

Going a step further, when multiple (20+) files are available over a relatively short period of time over an area of interest (AOI), such as data from Sentinel-1 with a 12-day revisit time, higher granularity of change can be measured using methods such as Small Baseline Subset (SBAS) processing, which takes advantage of small spatial and temporal orbital separation between the sensor and images, making millimeter-scale displacement measurements a reality. 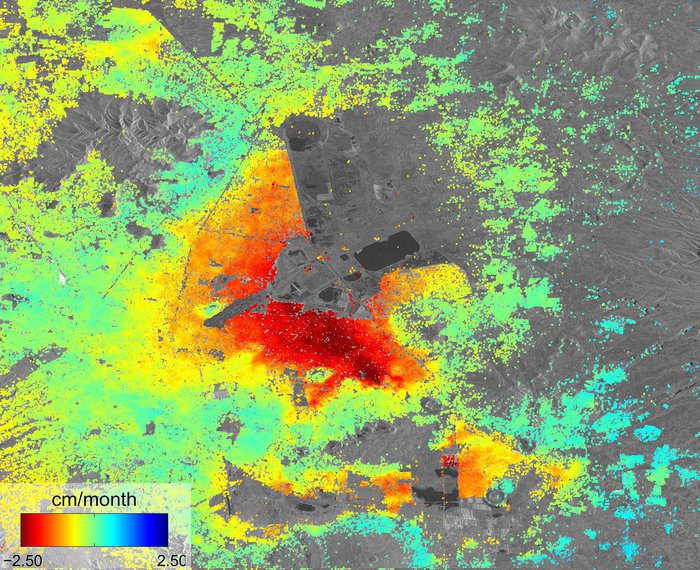 For example, subsurface hydrocarbon leaks affect soil chemistry, which manifest as changes to vegetation health. These changes may be subtle at first and difficult to detect in the visible spectral range. However, vegetation is highly sensitive, and when stressed, changes in the NIR and red-edge portions of the spectrum are pronounced. Spectral indices such as normalized-difference vegetation index (NDVI), soil-adjusted vegetation (SAVI), leaf-area index (LAI), and several other broadband greenness indices that exploit changes in these wavelengths help identify potential problems at an early stage.

In addition to VNIR bands, the availability of information in the SWIR range provides data useful for mineral identification. At a very high level, hydrocarbons are generated from organic matter in source rocks, which generally coexist with clay minerals and sedimentary rocks that are very sensitive to changes associated with hydrocarbon generation. As materials undergo chemical changes, their spectral signatures become altered. In the context of O&G exploration, alteration minerals manifest these changes and are detected in very specific portions of the electromagnetic spectrum: SWIR wavelengths.

Instead of providing such information in the paradigm of a hyperspectral data cube, many modern sensors can strategically place bands where the spectral information is located. These multispectral images reduce the need for some of the computationally intensive pre-processing required when working with hyperspectral data, while maintaining the accuracy of mineral identification.

The high spatial resolution (30-50 centimeters) of modern sensors capable of imaging in these strategically placed bands provides another advantage. Prior to these new sensors, remote-sensing methods to map vegetation stress or alteration minerals were performed on a regional scale. This was a great way to highlight potential areas of interest, but further study was required to refine the AOI to a reasonably sized footprint. With high spatial resolution, detailed maps are readily produced, saving time to generate accurate and actionable information. 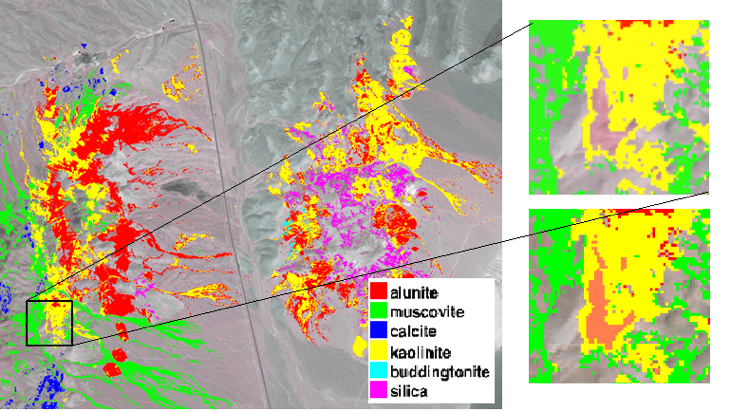 Although data type as well as spatial and spectral resolution are important considerations for O&G remote-sensing analyses, temporal information and data fusion also add great value. New imagery is available almost anywhere on Earth at higher temporal resolution than ever before. The 16-day revisit time of Landsat-8 and Modis (ground-track repeat cycle) makes it possible to include time as a variable in regional-scale analyses at little to no cost. Higher-spatial-resolution imagery such as from the Pleiades sensors or WorldView-3 (and others) enables daily revisits for very granular time-sensitive analyses, such as tracking the size and scope of a spill or frequently monitoring a natural hazard or disaster that can impact operations.

But satellites aren’t the only platforms offering high revisit rates. The booming industry of unmanned aerial systems (UASs) enables revisit times often more than once per day, and perhaps equally as powerful is their ability to interchange the payload, making multimodal data fusion a common practice. UAS companies such as PrecisionHawk can image a site with high-resolution optical sensors as well as another sensor such as LiDAR or SAR, either at the same time with multi-payload systems or on the same day with a single interchangeable payload. Then analysis products such as spill delineations, volumetric measurements, building footprints, vegetation health maps and transportation corridors can be fused together to answer questions about the size and scope of disasters, proximity of population to thoroughfares, volumetric change, vegetation health and fault locations.

The myriad data modalities and resolutions now available mandate the need for modern and easy-to-consume analytics that are accessible within a powerful infrastructure. For example, using ENVI software, no matter what data format or source modality, the ingestion, processing, exploitation and dissemination of information products are seamless, because it uses an open architecture in which each individual data-processing task is consumable as a discrete process that accomplishes a very specific goal. These tasks are accessible as REST endpoints and are chained together to develop custom workflows aimed at solving specific problems. Research and development efforts are supported at the desktop, enabling real-time interaction with pixels so appropriate parameters are defined for each algorithm prior to generating the custom workflow.

Where these processes occur is entirely configurable. In some cases, such as near-real-time evaluation of high-resolution imagery for pipeline damage, it may make sense to install analytics on a ruggedized field laptop where an operator can assess damage before leaving the site. In a case where exploration teams want to download a mineral map via the Web, it may make sense to co-locate the imagery with analytics in a cloud environment. In this configuration, the operator defines an AOI in a browser, clicks “go” and gets their map—without the need to install software locally or learn the analytics.

In the decades spent refining below-surface modeling and analytic techniques used across the O&G industry, ENVI scientists have been building analytics to exploit remote-sensing phenomenology and extract meaningful information about what’s happening at and above the surface. Above-surface remote-sensing solutions that support multiple modalities, data fusion and advanced analytics in a modern infrastructure are no longer the way of the future, but the practice of the present.