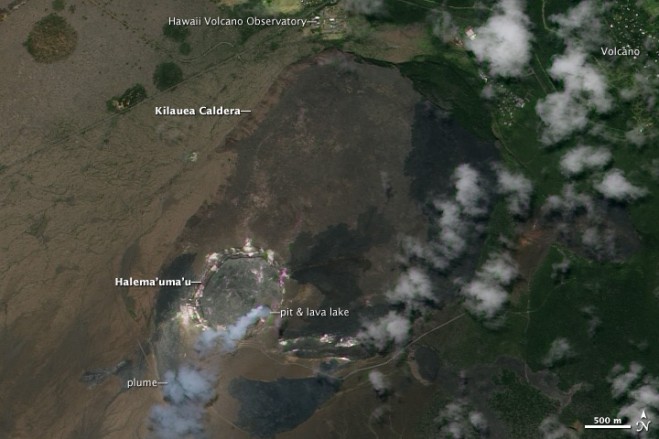 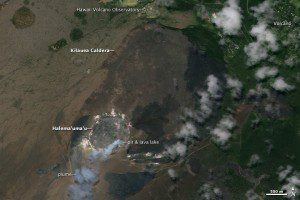 A blue-tinted volcanic plume rises from within a pit near the southeastern edge of the Halema’uma’u Crater.

The world’s longest-lived volcanic eruption, Kilauea, continued on July 30, 2011. Cycles of activity at Kilauea’s summit have been stable for months, ever since lava flows at the Kamoamoa Fissure subsided in March 2011. Deep within Halema’uma’u Crater (which lies within the larger Kilauea Caldera), a small lava lake rises and falls as magma ebbs and flows. Sensitive instruments monitor these movements within the volcano by recording the tilt of the summit: decreasing tilt reflects deflation of the magma chamber; increasing tilt indicates inflation. Each cycle of deflation and inflation usually lasts several days.

This natural-color satellite image shows the summit of Kilauea Volcano, near the southern coast of the Big Island of Hawaii. Kilauea Caldera and Halema’uma’u Crater are both visible, as well as the Hawaii Volcano Observatory and the village of Volcano. The northeast, windward side of Kilauea is covered in dark green Ohia forest. The dry, leeward side is nearly barren and brown. Fresh lava flows are dark gray.

A blue-tinted volcanic plume rises from within a pit near the southeastern edge of Halema’uma’u. The plume, rich in sulfur dioxide gas, is emitted from the surface of a lava lake. In addition to falling and rising with the deflation-inflation events of the Kilauea Summit, the elevation of the lava lake varies in a series of fill-and-drain cycles that last minutes to hours. Sulfur dioxide emissions increase when the lake falls, and decrease when the lake rises. This suggests that gas within the lava lake is trapped when the surface of the lava hardens, and pushes the lake up like a piston. When gas is released, the lake level falls.