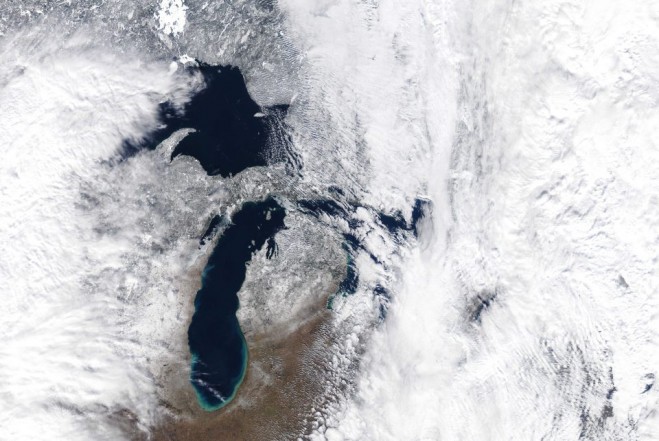 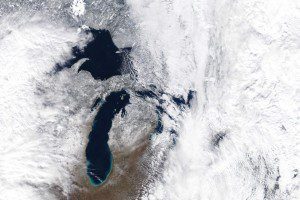 The bright white at the tip of Lake Superior shows where some ice has formed. The coloration along Michigan's west coast is sediment that comes off the rivers.

“It’s an incredible lack of ice this winter,” the National Weather Service (NWS) in Gaylord said.

The bright white at the tip of Lake Superior shows where ice has formed, he said. Meanwhile, there is little ice on Lake Superior’s Whitefish Bay, while ice in Lake Michigan’s Green Bay was breaking up from last week’s warmup.

“If you squint at Green Bay, you see ice there, because it’s more protected. Areas with less wave action ice up first,” he said.

Even though ice around the Straits of Mackinac is relatively thin, on Saturday the U.S. Coast Guard freed two ships trapped by ice there: a 678-foot bulk carrier named the Manistee and the 90-foot ferry, Huron, with 68 people aboard.

The coloration along Michigan’s west coast is sediment that comes off the rivers, according to Kowaleski. There has been a few feet of ice building on the Lake Michigan shore in West Michigan, but before the satellite picks that up, it would need to stretch at least a half mile, he said.

“If cold air moves in, we could get pretty significant lake effect snows. Sometimes we can even tap a little moisture and energy from Lake Superior. With the energy comes from the warmth of water,” Kowaleski said.

Water temps are still around 40 degrees in southern Lake Michigan, he said.

Lake Michigan last iced over completely during a winter in the late 1980s. It also happened in 1978, Kowaleski said. Grand Rapids is running about 5 degrees above normal for the month of January, the city’s 18th warmest January in the last 130 years, he said.