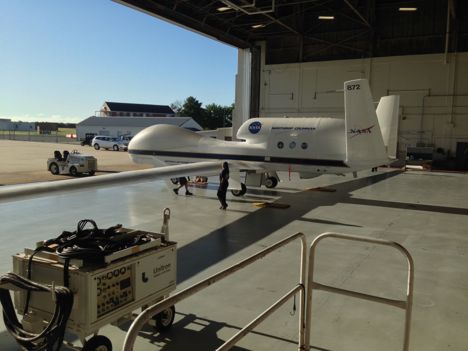 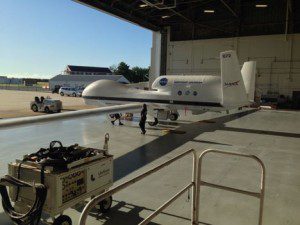 Wallops Flight Facility welcomed the AV-6 drone back from Armstrong Flight Research Center on Aug. 27, 2014. On the way to the facility, AV-6 was able to get a good set of observations of Hurricane Cristobal. 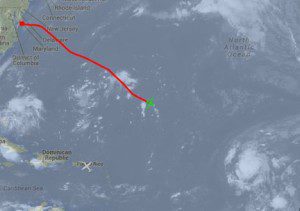 On Sept. 11, 2014, AV-6 (green icon) followed this flight path from the Wallops Flight Facility to Tropical Depression Six as seen in GOES infrared satellite imagery overlaid on a Google map.

Review the progress of NASA’s Hurricane and Severe Storm Sentinel (HS3) 2014 program conducted from the Wallops Flight Facility as recorded by Mary Morris:

Sept. 11, 2014—Since I last posted, HS3 has decided to give up on trying to fix AV-1, thus ending my time at NASA Wallops this hurricane season. We came to this decision so we would still have some time to get two of the instruments, including the one I work with, off AV-1 and moved onto a WB-57 for the rest of the hurricane season. So not all hope is lost! While I am disappointed that my time at Wallops will be cut short, it is important for us to move on. If everything goes smoothly, we could be ready to fly the WB-57 in a little over a week.

Although I would have wished to detail more of my “field work” experiences here, I think my experiences, or lack thereof, is also important to portray. Like most jobs, this one has its up and downs. This campaign has taught us all how to adapt to difficult situations and make the most of every opportunity.

HS3 scientists are making the most of this situation right now with the use of our other UAV, AV-6, which is currently heading toward tropical depression six. In just this past week, AV-6 has been able to successfully investigate two other systems: Tropical Storm Dolly and a weaker system off the African Coast.