September 17, 2014
Understanding the Science of Sunglint 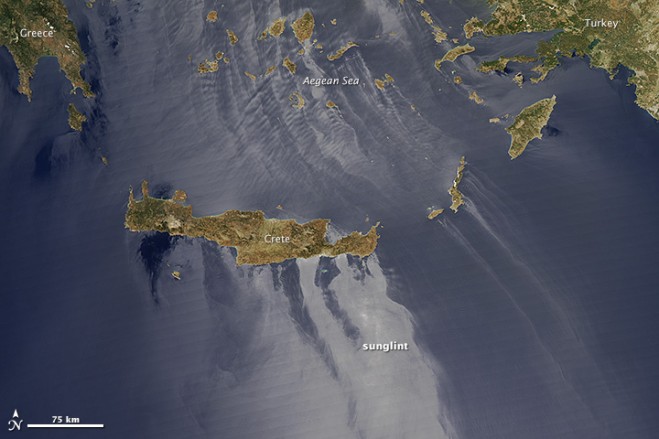 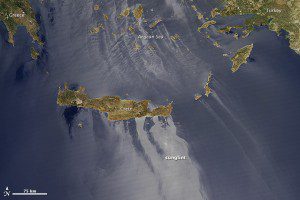 The combination of sunglint, wind patterns, and island shapes around Crete and the Aegean islands made for a particularly spectacular scene on July 3, 2014, in this image collected by NASA’s Aqua satellite.

If you look frequently at satellite imagery or astronaut photography, you’ve probably noticed bright patches of light that can make certain bodies of water gleam with unusual color.

That gleam is caused by sunglint, an optical phenomenon that occurs when sunlight reflects off the surface of water at the same angle that a satellite sensor views it. The result is a mirror-like specular reflection of sunlight off the water and back at the satellite sensor or astronaut.

If bodies of water were perfectly smooth, a sequence of nearly perfect reflections of the sun would appear in a line along the track of the satellite’s orbit. In reality, water surfaces are irregular and often in motion due to waves and currents, so the sunlight gets scattered in many directions and leaves blurry streaks of light in the swaths of satellite data.