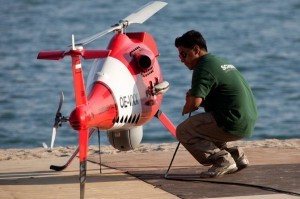 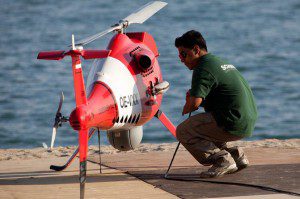 The Camcopter looks a lot like a conventional helicopter, complete with rotors, a vertical tail and two front legs to land on. It weighs just 243 pounds, stands 44 inches high and is about 10 feet long. It can fly up to six hours at 138 miles per hour.

Thanks to Schiebel’s partnerships with U.S. companies Brain Farm and Snaproll Media, both of which specialize in aerial photography, the Camcopter can capture high-definition, broadcast-quality footage while hovering over anything from wildfires and disaster zones to high-speed police chases.

The Camcopter is one of a growing array of drones that are being developed for broadcasting, public safety, search and rescue, agriculture and other commercial applications—all in anticipation of new Federal Aviation Administration regulations authorizing and governing such uses.