November 26, 2013
There’s Something Fishy in the Atlantic Night … 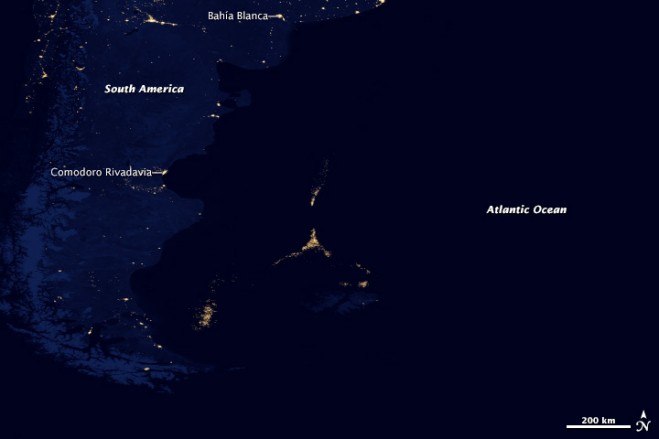 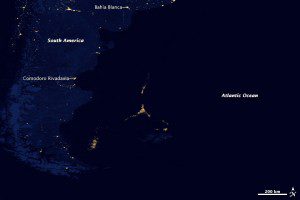 When NASA and NOAA released their newest map of Earth at night, a new city of light appeared in the middle of the South Atlantic Ocean about 300 miles off the coast of Argentina.

There are no human settlements there, nor fires or gas wells. But the map, comprising data from the Suomi NPP satellite, reveals a lot of fishing boats. Adorned with lights for night fishing, the boats cluster offshore along invisible lines—the underwater edge of the continental shelf, the nutrient-rich Malvinas Current, and the boundaries of the exclusive economic zones of Argentina and the Falkland Islands.

The night fishermen are hunting for Illex argentinus, a species of short-finned squid that forms the second largest squid fishery on the planet. The squid are found tens to hundreds of kilometers offshore from roughly Rio de Janeiro to Tierra del Fuego (22 to 54 degrees South latitude). They live 80 to 600 meters (250 to 2,000 feet) below the surface, feeding on shrimp, crabs and fish. In turn, the squid are consumed by larger finfish, whales, seals, sea birds, penguins … and humans.