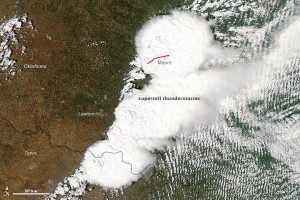 The Moderate Resolution Imaging Spectroradiometer sensor on NASA's Aqua satellite acquired this natural-color image of the storm system at 2:40 p.m. Central Daylight Time, just minutes before the devastating twister began. The red line on the image depicts the tornado's track.

On May 20, 2013, NASA's Aqua satellite captured an image of a supercell thunderstorm just minutes before it spawned a destructive tornado that passed just south of Oklahoma City.

According to National Weather Service and media reports, the mile-wide tornado had a preliminary damage rating of EF-4, with winds reaching 190 miles per hour. It had a relatively slow forward speed for such a violent storm”about 20“25 miles per hour”likely exacerbating the damage. Debris from the tornado fell as far as 100 miles (160 kilometers) away, reaching the city of Tulsa.