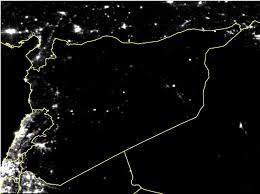 The effects of Syria’s five-year conflict are communicated in these satellite images from 2011 and 2014, showing an 83 percent decline in nighttime lights as one-third of the population have been displaced. 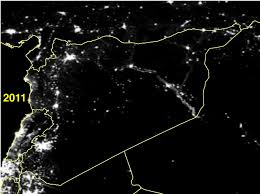 A series of satellite images shows the growing effects of the Syrian conflict, which has already cost 200,000 lives and displaced at least one-third of the populace. A recent analysis of the nightlight imagery between March 2011 and today indicates 83 percent of the lights going dark in that time span.

The analysis was conducted by Dr. Xi Li of the Laboratory for Information Engineering in Surveying, Mapping and Remote Sensing at Wuhan University in China. The figures were updated from Dr Xi’s 2014 study published in the International Journal of Remote Sensing, in which he and Prof. Deren Li analyzed the effect of the Syrian crisis on levels of nighttime light as a way to evaluate and monitor the conflict. By comparing the levels of light in March 2011 and February 2014, they found that in all of the provinces, the levels of nighttime light had declined sharply following the breakout of the conflict.

The Wuhan University effort was in cooperation with the #withSyria coalition of 130 nongovernmental organizations to spread a greater awareness of the conflict and to urge world leaders to “Turn the Lights Back on for Syria.” An online petition displays the imagery and details additional statistics, including:

“Satellite imagery is the most objective source of data showing the devastation of Syria on a national scale,” said Li.

The #withSyria coalition hopes to boost humanitarian response and to find a political solution to end the conflict.