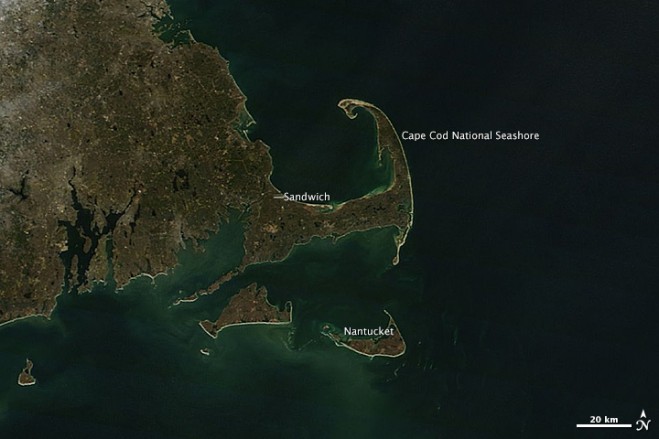 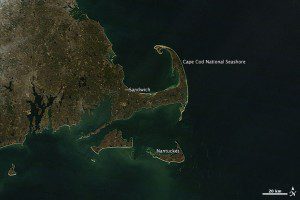 : This image of Cape Cod and the east coast of Massachusetts, acquired by NASA’s Terra satellite on Jan. 20, 2013, shows the surrounding waters at a quieter time. 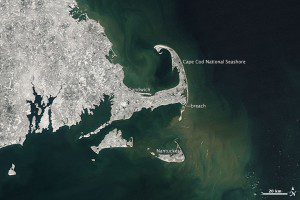 This image, acquired by Terra on Feb. 10, 2013, just hours after the nor’easter moved out to sea, shows several feet of fresh snow covering the landscape and plumes of sediment swirling in the water.

The Moderate Resolution Imaging Spectroradiometer (MODIS) sensor on NASA’s Terra satellite captured glimpses of the storm’s effect on the coastal environment. In February, plumes of tan and milky sediment swirl in the waters off Cape Cod and the east coast of Massachusetts. According to Graham Giese, a marine geologist at the Provincetown Center for Coastal Studies, the suspended sediment was most likely composed of silts and clays stirred up from the shallow seafloor.

Cape Cod, Martha’s Vineyard and Nantucket—as well as the shelves and shoals around them—were laid down as glacial deposits when large ice sheets retreated at the end of the last Ice Age. It’s also possible (but less likely) that some of the discolored water is phytoplankton blooming in the wake of the storm.