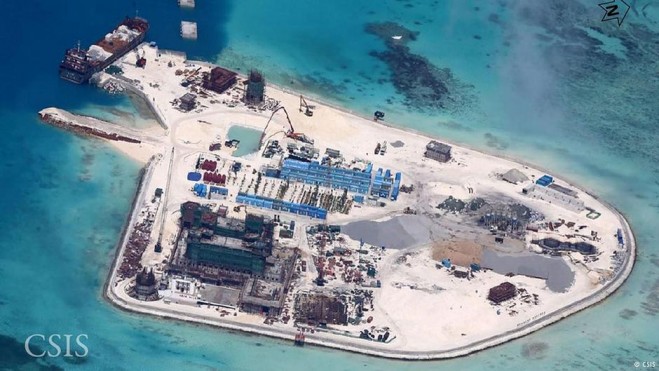 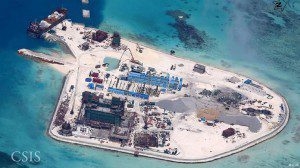 Some have speculated that China plans to build an airstrip atop Johnson South Reef, pictured here under construction in images released on Feb. 18. Image courtesy of CSIS.

The Center for Strategic & International Studies (CSIS) obtained surveillance imagery that shows the size and scope of China’s dredging and land development activities in the reefs and islands of the Spratly Islands in the South China Sea. The photographs were released on Feb. 18, depicting activity on the Gaven Reef, Johnson South Reef, Fiery Cross Reef, Cuarteron Reef, and Hughes Reef.

The images show a larger scale and more rapid development pace than was previously thought. The imagery of the artificially created land has many governments in the region concerned, including diplomatic protests from the Philippines regarding Mission Reef in particular, as that area is within 135 kilometers from the country’s shore and part of its declared exclusive economic zone.

China claims the area for resources such as oil, gas and fish, and has even sent drilling rigs into the area for oil and gas exploration. There is widespread speculation that military installments and airs strips will be the next steps on these new manmade islands. Athough the UN Convention on the Law of the Sea is explicit in stating that an exclusive economic zone can’t come from an artificial island, China pushes on.