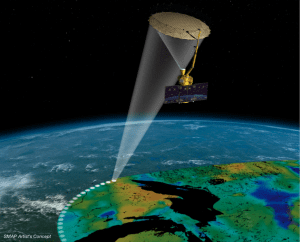 The SMAP satellite will map the moisture in the top few inches of soil for Earth’s entire land mass every two to three days.

The successful launch of NASA’s Soil Moisture Active Passive (SMAP) satellite on Jan. 31, 2015, promises more accurate measurements of soil dampness. Using microwave pulses, the instrument is able to detect how much moisture is in the ground, because the moisture affects how many microwaves bounce back. The microwaves eliminate the impact of atmospheric moisture, plants and even the first few inches of dirt to measure soil wetness.

“Soil moisture is an important part of Earth’s climate,” said Chuong Nguyen, SMAP mission manager. “As it evaporates, it condenses into the clouds and atmosphere, and that in turn becomes rain later in the weather cycle. SMAP will help with climate forecasting and help predict a good growing season. That’s an important part of agriculture in the United States and around the world.”

The SMAP satellite has two instruments: a radar that will provide high-resolution measurements of the moisture in the soil, though not as accurate as radiometer observations, and a radiometer that has higher accuracy but lower resolution than the radar. Working together, the instruments will provide greater accuracy and spatial resolution in measuring soil moisture than would be possible using either instrument alone.

Such high-resolution measurement of soil moisture will indicate moisture level and whether the soil is frozen or thawed. The new measurements will aid agricultural forecasts as well as those for natural hazards from floods, droughts and climate change. The satellite will map Earth’s entire land mass every two to three days.

Read a detailed description of the mission in the SMAP Handbook.