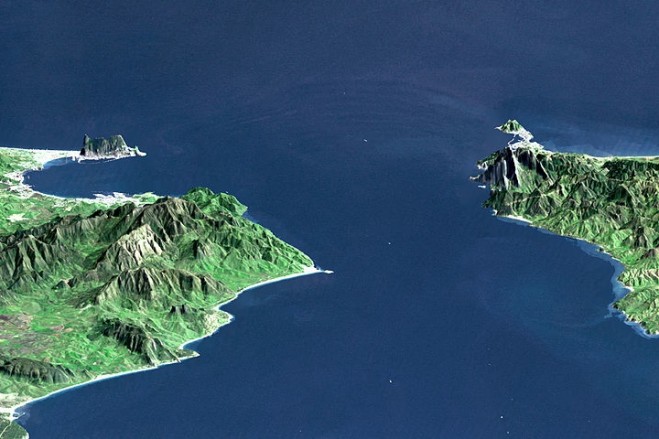 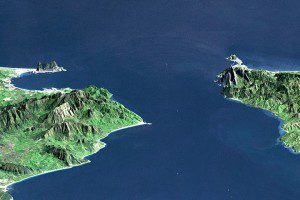 SRTM, which flew aboard NASA’s Space Shuttle Endeavour during an 11-day mission in 2000, made the first near-global topographical map of Earth, collecting data on nearly 80 percent of Earth’s land surfaces. This SRTM image shows the Strait of Gibraltar.

President Obama announced several initiatives to support a scientific and technological response to climate change on Sept. 23, 2014, including the release of global 30-meter elevation data sets collected by the Shuttle Radar Topography Mission (SRTM). The announcements were made in conjunction with the Climate Summit taking place at the UN Headquarters in New York City.

The language of this open data initiative reads:

“To empower local authorities to better plan for the impacts of severe environmental changes such as drought, glacial retreat, flooding, landslides, coastal storm surges, agricultural stresses, and challenges concerning public health, today the National Aeronautics and Space Administration (NASA), the National Geospatial-intelligence Agency (NGA), and the U.S. Geological Survey (USGS), as part of an ongoing commitment to open data and international data sharing through the inter-governmental Group on Earth Observations, will release a collection of higher-resolution elevation datasets for Africa. Datasets covering other global regions will be made available within one year, with the next release of data providing more accurate elevation information for Mexico, Central and South America, and the Caribbean.”

The datasets will be made available via the U.S. Geological Survey’s Earth Explorer website. Online training and workshops will be carried out by the Secure World Foundation in collaboration with the Committee on Earth Observation Satellites, USGS, NOAA, and NASA to help users make the most of the data sets.

President Obama’s Executive Order included several other related initiatives, including a NOAA-led extreme-weather risk outlook effort beyond the current 14-day limit and the spread of meteorological tools to developing nations.