October 8, 2014
Scripps Unveils a Remotely Sensed Map of the Seafloor 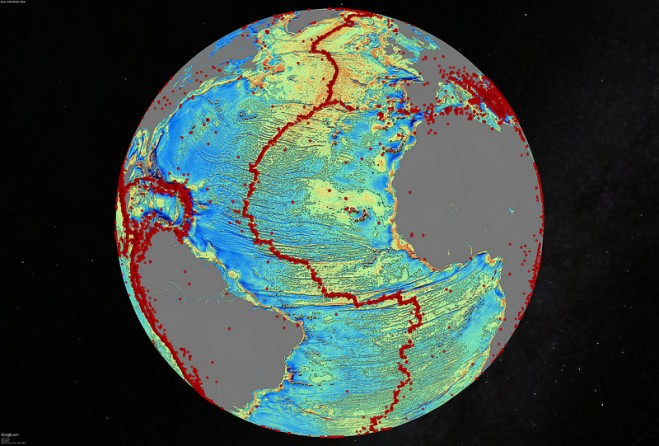 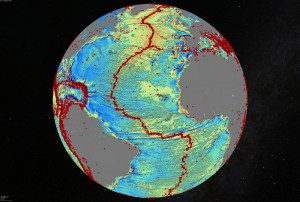 A marine gravity model of the North Atlantic shows the plate tectonic history of the continents. Red dots indicate earthquakes of magnitude 5.5 and higher.

Scientists at the Scripps Institution of Oceanography at UC San Diego created a new detailed map of the world’s seafloor, primarily using two gravity satellite data sources. The data come from the European Space Agency’s CryoSat-2 satellite and Jason-1, NASA’s satellite that mapped the gravity field during the last year of its 12-year mission.

The new map of provides a more detailed picture of the structures that make up the deepest, least-explored parts of the ocean with details twice as accurate as the previous version produced nearly 20 years ago. This new data, combined with other more accurate remote sensing inputs, has uncovered thousands of previously uncharted mountains rising from the seafloor and new clues about the formation of the continents.

“The kinds of things you can see very clearly now are abyssal hills, which are the most common land form on the planet,” said David Sandwell, a geophysics professor in the Cecil H. and Ida M. Green Institute of Geophysics and Planetary Physics at Scripps.

The new marine gravity field map is already helping to improve seafloor depth estimates in the 80 percent of the oceans that remains uncharted.

“The team has developed and proved a powerful new tool for high-resolution exploration of regional seafloor structure and geophysical processes,” says Don Rice, program director in the National Science Foundation’s Division of Ocean Sciences. “This capability will allow us to revisit unsolved questions and to pinpoint where to focus future exploratory work.”

Maps and related resources can be found here.

Read more details about the mapping effort here and more about the Cryosat mission here.