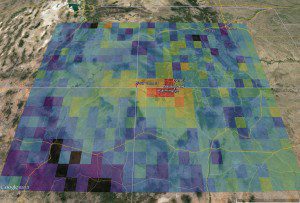 A hotspot of methane in the Four Corners region of the United States has been detected and monitored via a European satellite-based methane-measuring instrument between 2003 and 2009. Researchers are mounting a scientific expedition to understand why.

Researchers are working in the Four Corners region of the U.S. Southwest to understand a mysterious methane concentration detected by a European methane-measuring satellite instrument that was operational between 2003 and 2009. The greenhouse gas measurements will be enhanced with a multipart scientific mission that includes ground, airborne and spaceborne measurements.

Ground: Mobile laboratories will be driven to the region armed with sophisticated chemical detection instruments to target areas identified by aircraft and to further characterize and investigate possible sources. An extensive network of wind measurement sensors will help augment the readings to help pinpoint methane sources.

Space: The methane instrument aboard the Japanese GOSAT satellite has been programmed to focus on the region.

If we can verify the methane emissions found by the satellite, and identify the various sources, then decision-makers will have critical information for any actions they are considering,” says Gabrielle PÃ©tron, a scientist from the Cooperative Institute for Research in Environmental Sciences (CIRES) at the University of Colorado Boulder, working in the National Oceanic and Atmospheric Administration (NOAA) Earth System Research Laboratory (ESRL) Laboratory.

The Twin Otter Projects Defining Oil Well and Natural (TOPDOWN) gas emissions project is funded by NOAA's Climate Program Office and the National Science Foundation. The research team includes CIRES, ESRL, NASA, the University of Michigan, Bureau of Land Management and the state of New Mexico. With their combined resources, the researchers hope to quantify the region's overall methane emissions and the key point sources.