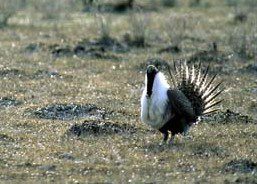 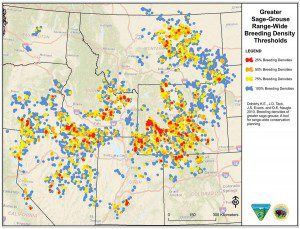 Sagebrush habitat in Southwestern Wyoming is a favored breeding ground for the greater sage grouse, as illustrated by this map from the Bureau of Land Management.

Scientists from the U.S. Geological Survey (USGS) analyzed nearly 30 years of Landsat Earth observation data over 3,216 square miles of southwestern Wyoming to forecast sagebrush habitat to the year 2050. The exercise was precipitated by the consideration under way for listing the sage grouse as a threatened or endangered species by the U.S. Fish and Wildlife Service.

The researchers concluded that climate change may pose a substantial risk for sagebrush habitat after carefully calculating historical precipitation changes from 1984 to 2011 that were correlated with the Intergovernmental Panel on Climate Change precipitation scenarios. The resulting model and forecast looked at likely changes from 2006 to 2050.

“Historic disturbances of fire, development and invasive species have altered the sagebrush landscape, but climate change may represent the habitat’s greatest future risk,” said Collin Homer, the USGS scientist who led the study. “Warming temperatures, combined with less snow and rain, will favor species other than sagebrush, as well as increase sagebrush habitat’s vulnerability to fire, insects, disease and invasive species.”

The study of semiarid land and its vulnerability to precipitation changes to already low soil moisture content predicts decreasing amounts of sagebrush and other shrubs, grasses and flowering plants as well as increasing amounts of bare ground. According to the study’s results, the sage-grouse’s summer habitat has a potential loss of 4 percent and their nesting habitat could decrease by 12 percent by 2050.