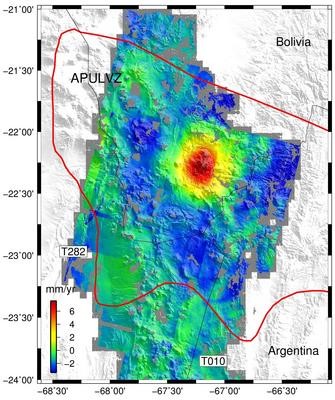 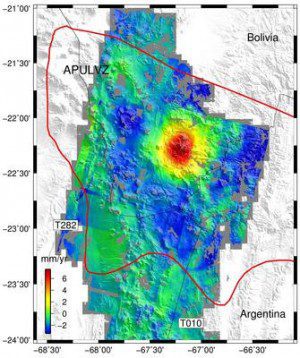 Radar data from the European Space Agency’s ERS-1, ERS-2 and recently decommissioned Envisat satellites show a central uplift of about 10 mm per year near the Uturuncu volcano (dark red). The surrounding region shows a slower subsidence at a rate of about 2 mm per year (blue). Data were acquired from 1992–2010.

In a study published in Science, scientists used radar data from theERS and Envisat missions to study an unusual uplift near the Uturuncu volcano, which had been dormant for 270 000 years. The surrounding area, however, is sinking at a slower rate of about 2 mm per year. With the wide-brimmed hat-like shape this creates, the study team has nicknamed this the “sombrero uplift.” The deformation is attributed to a ballooning of a buoyant volume of molten rock at the top of the Altiplano–Puna magma body