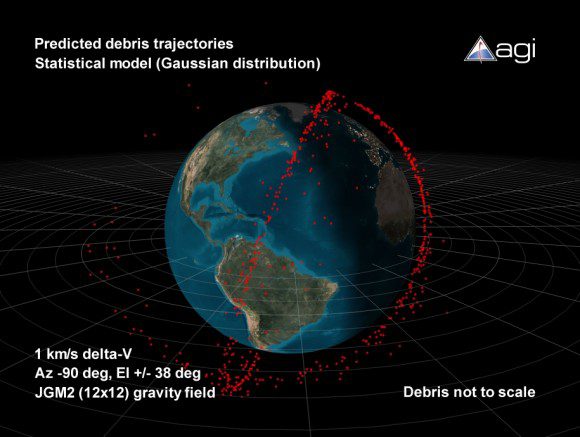 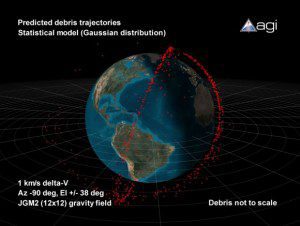 This image represents a simulation of a U.S. Iridium satellite colliding with an inactive Russian Cosmos 2251 satellite in 2009.

How and why did this collision happen? If NORAD, the U.S. Air Force’s Space Surveillance Network, NASA’s Orbital Debris Program Office and other entities are tracking space debris, did anyone know the collision was going to occur? Those who analyze data and track satellites say predicting collisions is difficult because of changes in satellite orbits that occur due to solar radiation and the gravitational effects of the moon and Earth. Therefore, the orbit analysis is only as good as the data, which may be imprecise.

Before the collision, another collision event happened in 1996, when a French spy satellite called Cerise was severely damaged by a piece of debris from the rocket that launched it. The United States tracks debris or micro-meteorites down to 10 cm wide, but objects as small as a scrap of peeled-off paint can pose a threat once they start hurtling at orbital speeds through space.

Read more about space debris and human spacecraft from NASA: