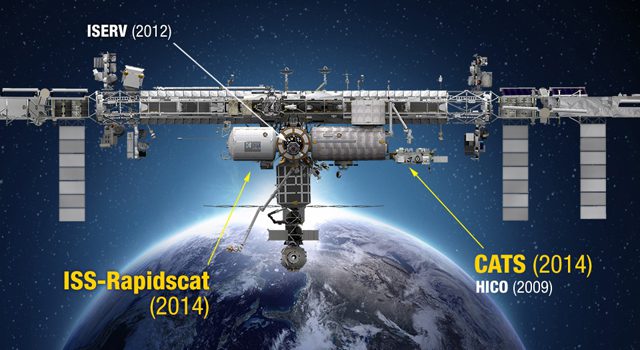 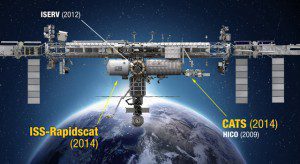 This NASA image shows the CATS instrument, with its cloud measurement capacity, alongside the RapidScat instrument, which monitors ocean winds.

Robotic arms recently installed the Cloud-Aerosol Transport System (CATS) laser instrument aboard the International Space Station (ISS) on Jan. 22, 2015. The instrument will measure clouds and the location and distribution of pollution, mineral dust, smoke and other particles in the atmosphere.

“We’re seeing the space station come into its own as an Earth-observing platform,” said Julie Robinson, chief scientist for the ISS program at NASA’s Johnson Space Center in Houston. “It has a different orbit than other Earth remote sensing platforms. It’s closer to Earth, and it sees Earth at different times of day with a different schedule. That offers opportunities that complement other Earth-sensing instruments in orbit today.”

In addition to this newly installed instrument, NASA is developing two more that were approved last July. The Global Ecosystem Dynamics Investigation (GEDI) will use lasers to study the canopy structure of forests. The ECOsystem Spaceborne Thermal Radiometer Experiment (ECOSTRESS) is a high-resolution thermal imaging spectrometer that will be used to study water use and water stress in vegetation.