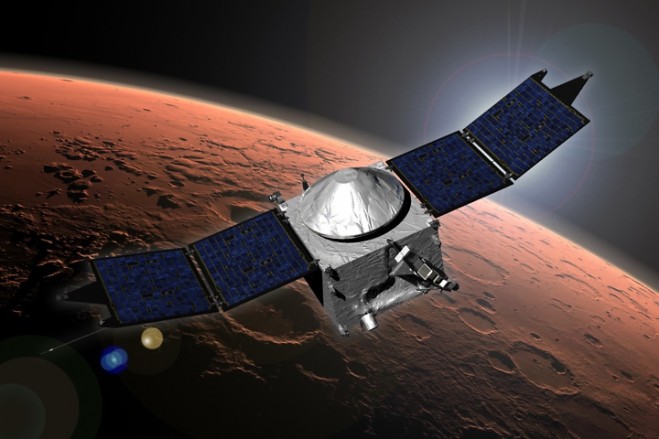 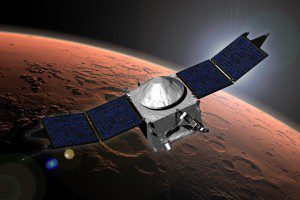 An artist’s illustration shows NASA’s MAVEN mission, which will explore the red planet’s upper atmosphere, ionosphere and interactions with the sun and solar wind.

Two observation satellites reached Mars this week: NASA’s Mars Atmosphere and Volatile Evolution (MAVEN) spacecraft successfully entered Mars’ orbit on Sept. 21, and India’s Mangalyaan orbiter entered orbit on Sept. 24. Both satellites have a remote sensing mission, with multiple instruments on board to study the planet and its atmosphere.

The MAVEN spacecraft will have an elliptical path around the planet, with observations ranging from 90 miles to 3,900 miles and a vantage point to observe the entire planet. The primary mission to explore the upper atmosphere of Mars is slated for one Earth year in length, with the goal of better understanding the red planet’s climate history.

MAVEN has eight instruments within three instrument suites. The Particles and Fields Package (PFP), provided by the University of California at Berkeley Space Sciences Laboratory, contains six instruments to characterize the solar wind and ionosphere. The Remote Sensing Package, built by the University of Colorado at the Boulder Laboratory for Atmospheric and Space Physics, will determine global characteristics of the upper atmosphere and ionosphere. The Neutral Gas and Ion Mass Spectrometer (NGIMS), built by NASA’s Goddard Space Flight Center, will measure the composition and isotopes of neutrals and ions.

The Mangalyaan satellite was developed by the Indian Space Research Organisation (ISRO) in just four years, with the primary goal of developing the technology to design, plan and manage an interplanetary mission. This interplanetary capacity puts the country in rare company, joining the United States, Russia and some members of the European Union as the only others to have achieved such status.

The Mangalyaan satellite has five instruments aboard its 15-kilogram payload, with the goal of exploring the planet’s surface features, morphology, mineralogy and atmosphere. The payloads consist of a camera, two spectrometers, a radiometer and a photometer. The Lyman Alpha Photometer (LAP) is an absorption cell photometer that measures the relative abundance of deuterium and hydrogen from lyman-alpha emission in the Martian upper atmosphere, helping understand the loss process of water. The Methane Sensor for Mars (MSM) is designed to measure methane in the Martian atmosphere and map its sources. The Mars Exospheric Neutral Composition Analyser (MENCA) is a quadruple mass spectrometer capable of analyzing the neutral composition in the range of 1 to 300 amu with unit mass resolution. The Mars Color Camera (MCC) captures images and information about the planet’s surface features and composition. The Thermal Infrared Imaging Spectrometer (TIS) will map the planet’s surface composition and mineralogy.