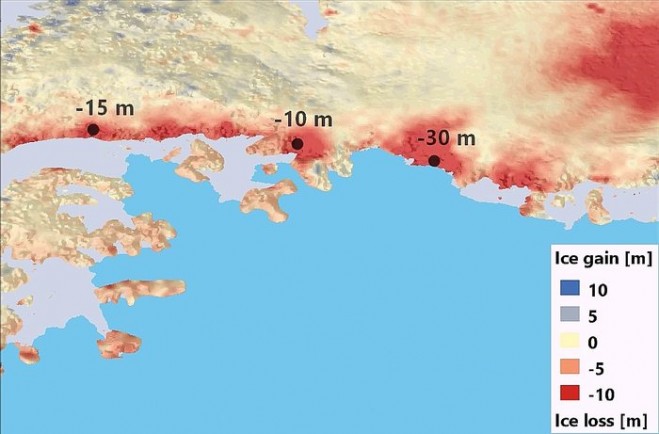 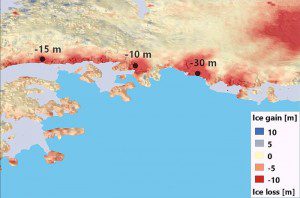 A team of scientists at the University of Bristol detected rapid ice loss in multiple glaciers along the Southern Antarctic Peninsula at a rate of about 60 cubic kilometers each year, starting in 2009. The thinning ice shelf was detected by the European Space Agency’s CryoSat ice mission, which uses an advanced radar altimeter to measure ice surface height and variation.

“It appears that sometime around 2009, the ice-shelf thinning and the subsurface melting of the glaciers passed a critical threshold that triggered the sudden ice loss,” said Bert Wouters, University of Bristol, who led the study. Prior to 2009, the area was stable with no signs of change.

When investigating the cause of the ice loss, the team found no changes in snowfall or air temperature; instead, they attribute the loss to warming oceans and stronger winds that push warm waters toward the poles.

“To pinpoint the cause of the changes, more data need to be collected,” said Wouters. “A detailed knowledge of geometry of the local ice shelves, the ocean floor topography, ice sheet thickness and glacier flow speeds are crucial to tell how much longer the thinning will continue.”