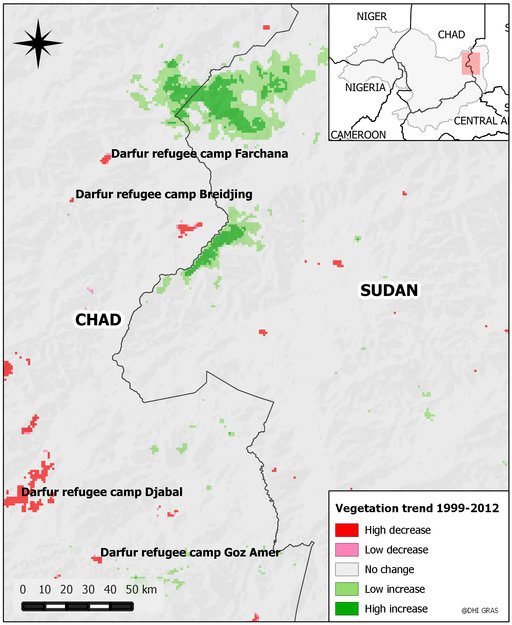 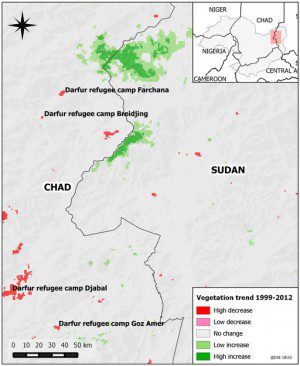 While performing water assessments near the eastern edge of the Lake Chad Basin, satellite imagery analysts also noticed increased land degradation caused by the war in Sudan’s Darfur region. Many of the displaced moved into refugee camps in neighboring Chad. These areas are clearly visible in satellite data, showing land degradation where natural resources are being overused.

Africa’s Lake Chad is the main source of fresh water for more than 30 million people in Chad, Cameroon, Niger and Nigeria. Despite seasonal fluctuations, the surface of Lake Chad has changed enormously in recent decades, with high losses from the 1960s to 1980s, mainly due to climate change and increased human demand for water.

But recent assessments indicate a turning trend, with the water surface extent in 2011 nearly doubled when compared with the 1985 extent due to increasing rainfall in the Sahel, particularly from 2004 onward. Part of this increase can also be attributed to flooding of the surrounding wetlands, which is a recurring phenomenon in the lake’s flat costal area.

ESA’s TIGER initiative develops Earth observation applications in close collaboration with its African partners to respond to the urgent need for reliable water information in their countries. It also supports research, capacity building and training on the continent within both national and transboundary water authorities.