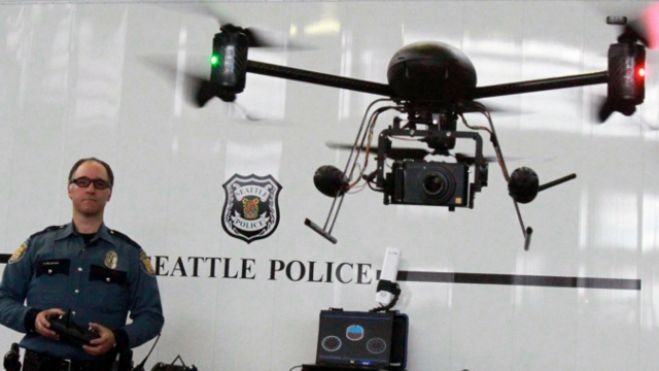 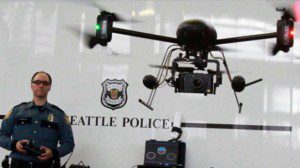 On April 27, 2012, Seattle Police officer Reuben Omelanchuk was at the controls of the department's newly acquired, small radio-controlled Draganflyer X6 drone with an attached camera. Seattle’s mayor recently told police to return the city’s drones to the vendor.

Virginia lawmakers on Feb. 5, 2013, approved a two-year moratorium on the use of drones by police and government agencies. The House of Delegates voted 83-16 to pass the bill. The Senate voted 36-2 to approve a similar measure. Proponents of the legislation say the unfettered use of the small, unmanned aircraft could infringe on Virginians’ privacy rights. A diverse coalition of organizations, including the American Civil Liberties Union, the Tea Party Federation and agriculture groups, supported the bills, while several law enforcement organizations opposed them.

“Our founders had no conception of things that would fly over them at night and peer into their backyards and send signals back to a home base,” said Sen. A. Donald McEachin, sponsor of the Senate bill.

Meanwhile, on Feb. 7, 2013, Seattle's mayor ordered the police department to abandon its plan to use drones after residents and privacy advocates protested. According to Mayor Mike McGinn, the department will not use two small drones it obtained through a federal grant. The unmanned aerial vehicles will be returned to the vendor.

The Seattle Police Department previously said it would use drones to provide an overhead view of large crime scenes, serious accidents, disasters, and search and rescue operations. The department had conducted drone demonstrations to show the public their capabilities.

Read about the Virginia lawmakers’ decision.

Read about the Seattle mayor’s decision.