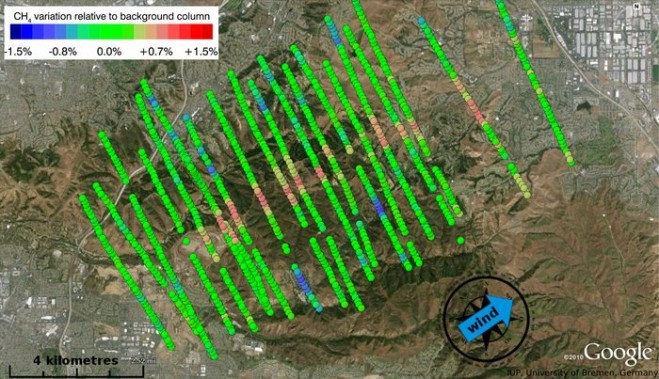 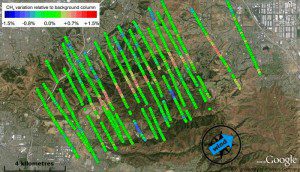 A methane plume is measured during the Comex campaign to support the development of CarbonSat, one of the two candidates for ESA’s eighth Earth Explorer satellite mission. The campaign was carried out in August–September 2014 in California.

European Space Agency (ESA) and NASA scientists cooperate on how ESA’s CarbonSat candidate satellite mission could identify sources of carbon dioxide and methane and how they disperse in the atmosphere.

CarbonSat is a candidate for ESA’s eighth Earth Explorer mission. The concept is based on detailed spatial imaging using an absorption spectrometer, an innovative approach for measuring these two strong greenhouse gases. This novel technique could lead to a better understanding of the sources and sinks of carbon dioxide and methane as well as untangle natural and anthropogenic sources.

As part of the CarbonSat’s development, field campaigns are carried out using airborne sensors to test the measuring concept. By joining forces, ESA and NASA carried out the recent Comex campaign that not only supported CarbonSat but also NASA’s proposed Hyperspectral Infrared Imager mission.

The campaign exploited passive remote-sensing spectroscopy, the unique absorption signature that the gases leave in sunlight as it passes through the atmosphere. Measurements are taken from aircraft above, as would the satellite, and compared with other measurements taken by aircraft and on the ground near the source of emissions. The measurements were taken in the San Joaquin Valley and around Los Angeles, an area that features oil refineries, farms and landfill sites, which all release methane into the atmosphere.

Image courtesy of University of Bremen.