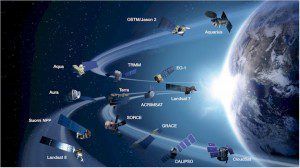 On April 30, 2015, the science committee of the U.S. House of Representatives approved a Republican-backed bill that calls for deep cuts in spending on earth science. The bill, H.R. 2039, would authorize $1.45 billion for earth science, which is well below the $1.95 billion requested.

“The NASA authorization bill making its way through the House of Representatives guts our Earth science program and threatens to set back generations worth of progress in better understanding our changing climate, and our ability to prepare for and respond to earthquakes, droughts, and storm events.”

“The House bill would also gut the NASA “Mission to Planet Earth”—the satellite observations and related research that provide key measurements and insights relevant to forecasting and tracking hurricanes, fighting wildfires, observing the state of the world’s farms and forests, mapping the extent of droughts, measuring the stocks of groundwater, and monitoring the likelihood of landslides. The draconian cuts in the House bill would also delay advances in our ability to research and prepare for volcanic eruptions, earthquakes, and tsunamis and blind us to changes in the Earth’s oceans and ice sheets that can be discerned only from space.”

The legislation passed the committee on a 15-19 party-line vote. The strong response to the cuts defends both the leadership position the United States enjoys in space technology innovation as well as the need to better understand global change.

Read the full responses from Bolden or Holdren.