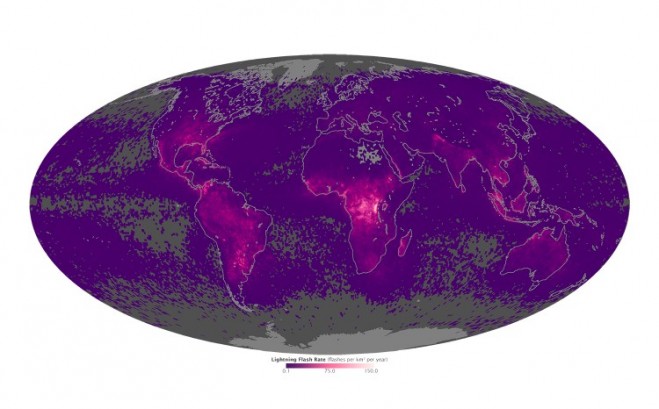 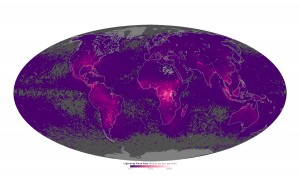 NASA compiled a new map of lightning flash frequency from around the world using satellite observations from the Lightning Imaging Sensor on the agency’s Tropical Rainfall Measuring Mission satellite and the Optical Transient Detector on the OrbView-1 Microlab satellite.

Lightning occurs at a higher frequency over land as the earth absorbs sunlight, and earth heats up faster than water. This causes greater convection and more atmospheric instability, leading to thunder and lightning-producing storms.

The map reveals some interesting regional trends. Many flashes occur in May in India’s Brahmaputra Valley just before the onset of the monsoon, which brings plenty of rain but much less lightning. In contrast, locations in Central Africa and Northwestern South America have large amounts of lightning throughout the entire year.

The maps shows the greatest amount of flashes in the far eastern Democratic Republic of Congo and Lake Maracaibo in northwestern Venezuela.

“The longer record allows us to more confidently identify some of these finer details,” he said. “We can examine seasonality and variability through the day and year to year.”