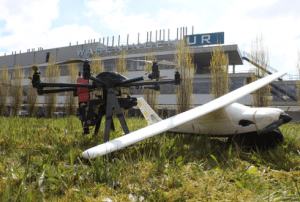 Researchers at Wageningen University are among the first in the Netherlands to be allowed to conduct research on unmanned aircraft system (UAS) technology. The country's regulatory body, the Human Environment and Transport Inspectorate, expects the researchers to help establish training courses, systems and flight procedures.

The UAS platforms, both fixed wing and an octocopter, provide new research platforms. The fixed-wing aircraft is being used to map larger areas with detailed models that look at erosion. The octocopter is being tested for precision agriculture and forestry applications.

Wageningen's Unmanned Aerial Remote Sensing Facility collaborates with the university's Laboratory of Geo-information Science and Remote Sensing and the Soil Physics and Land Management Group as well as the Alterra research institute.

“The flexibility of our unmanned aircraft has given us the potential to use advanced cameras to make highly detailed analyses of water or nutrient supplies in crops,” says Wageningen's Lammert Kooistra. “Combining this with existing satellite systems allows farmers to optimize irrigation and fertilization on their land while ensuring optimum timing. This will ultimately improve the crops themselves and the way scarce resources are used.”

The researchers have used their aircraft locally as well as internationally in projects in Spain, Bonaire, French Guyana, Indonesia and Rwanda.