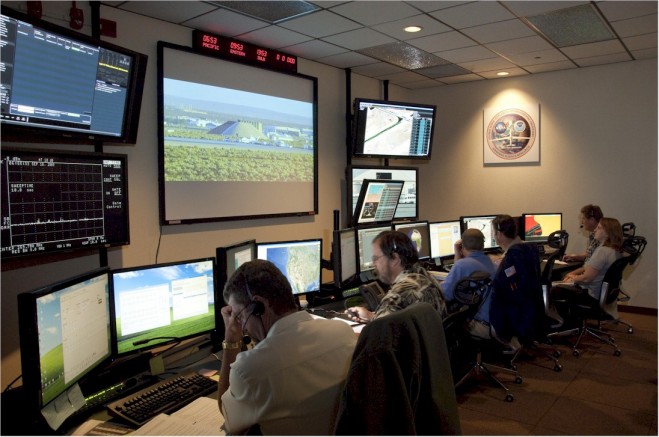 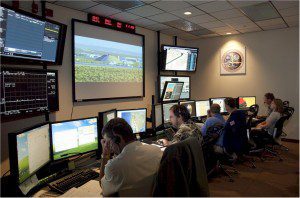 The Global Hawk Operations Center (GHOC) at NASA's Dryden Flight Research Center serves as the cockpit of the Global Hawk. The pilots, who monitor and control the aircraft from the GHOC, have displays of all aircraft parameters and can override the autonomous flight control system to make course corrections and altitude adjustments.

NASA’s Airborne Tropical TRopopause EXperiment (ATTREX) will conduct an ambitious science campaign over the Pacific Ocean from three locations in 2013 and 2014.

Studies have shown that even small changes in stratospheric humidity may have climate impacts that are significant compared to those of decadal increases in greenhouse gases. Predictions of stratospheric humidity changes are uncertain, due to gaps in the understanding of the physical processes occurring in the tropical tropopause layer, which ranges from about eight to 11 miles above the ground.

“These were test flights, although we did get science-quality data, including samples from tropical thin cirrus clouds at about 55,000 feet altitude,” said Leonhard Pfister, ATTREX deputy principal investigator at NASA’s Ames Research Center, Moffett Field, Calif. “These clouds regulate water vapor in the lower tropical stratosphere, which is important for Earth’s radiation balance.”

Eleven instruments were successfully installed aboard NASA’s Global Hawk Unmanned Aircraft System, which is capable of 24 to 30 hours of flight. The instruments include remote sensors for measuring clouds and temperature above and below the aircraft as well as in situ instruments for measuring water vapor, cloud properties, meteorological conditions, radiation fields and numerous trace gases. Test flights occurred Oct. 20 through Nov. 10 in the restricted area over Edwards Air Force Base, Calif., and the tropical eastern Pacific. On one long-duration fight, the aircraft flew farther south than any previous NASA Global Hawk science mission, reaching 6.5 degrees north latitude.

In addition to testing the instruments and obtaining preliminary science data, the flights were useful for evaluating the ability of the Global Hawk to operate at cold temperatures encountered at high altitudes in the tropics.

The team consists of investigators from NASA (including the Ames, Dryden and Langley research centers, Goddard Space Flight Center, and the Jet Propulsion Laboratory), the National Oceanic and Atmospheric Administration (NOAA), the National Center for Atmospheric Research (NCAR), three universities and private industry. The specialized instruments include a lidar, a spectrometer, a photometer, a chromatograph, a radiometer, hygrometers and several sensors that collect atmospheric data.

The science team will return to NASA Dryden in January 2013 to begin collecting science data with deployments to the Pacific region continuing in January and June 2014. Scientists hope to use the data to improve global model predictions of stratospheric humidity and composition.