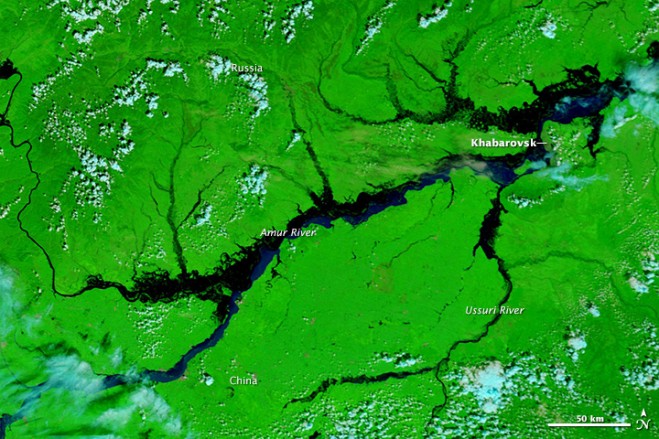 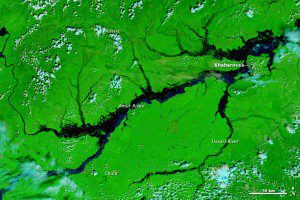 The clouds cleared on Aug. 21, 2013, when the Moderate Resolution Imaging Spectroradiometer sensor on NASA’s Terra satellite acquired this false-color image made from shortwave-infrared, near-infrared and red light. In this type of image, water is black or dark blue. Sediment-laden water or muddy ground is pale blue. Clouds are turquoise; plant-covered land is green; and bare earth is tan/pink. The contrast between this and the 2008 Terra image reveals extensive flooding along Russia’s Amur and Ussuri rivers. 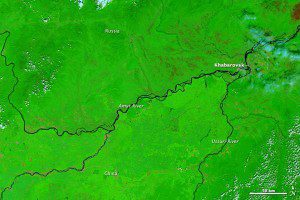 The region received more than 300 millimeters (12 inches) of rain in the first 12 days of August alone. Forecasters have described the event as the largest-scale flood in Russia’s history. Floodwaters forced more than 10,000 people from their homes, inundated vast swaths of farmland and swamped numerous roads.

In the city of Khabarovsk, the Amur River had swollen to a record height of 696 centimeters (274 inches) on Aug. 21, according to media reports. If the river height reaches 780 centimeters (307 inches), officials in Khabarovsk will begin mass evacuations of the city, which is home to 575,000 people.